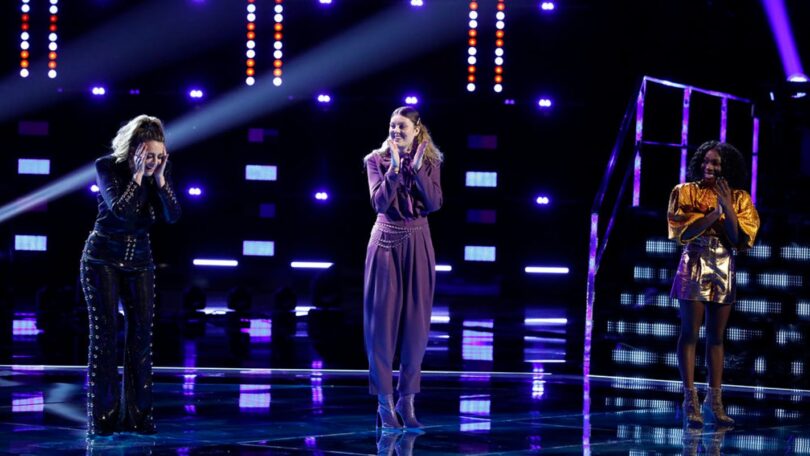 Welcome to the playoffs.

The top 17 contestants on “The Voice” laid it all on the line Monday during the first live show of the season, but not without some drama.

It started even before the first live performances of the evening, when host Carson Daly revealed the winner of last week’s four-way knockout that was decided by America: Team Blake Shelton’s Taryn Papa, Team John Legend’s Julia Cooper, Team Gwen Stefani’s Larriah Jackson and Team Kelly Clarkson’s Ryan Gallagher, who was noticeably missing from the telecast.

“Team Kelly’s Ryan Gallagher had to exit the competition,” Daly said without explanation. But if 2020 taught us one thing, its that the show must go on.

After the votes were tallied, Daly revealed America voted to save Papa, who struggled to maintain her composure and exit the stage.

“I go this way? I can’t see,” Papa said while struggling to find the stairs, a hilarious mishap that highlights the reality of live television. “They don’t prepare you for this.”

Clarkson replied, “I’ve never felt more rude, like, to not help someone,” while abiding by the social distancing guidelines amid the pandemic.

‘The Voice’: Kelly Clarkson steals spell-binding singer, thanks John Legend ‘for screwing up’

With Papa’s win, Shelton had an immediate leg up in the competition. He entered the playoffs with five artists, compared with the other coaches’ teams of four.

But Clarkson declared Shelton’s reign of country is over.

“All coaches are going into the playoffs with a country singer on their team,” Clarkson said. “Blake Shelton does not rule anymore.”

Clarkson’s Madeline Consoer caught Shelton’s eye with a rendition of Lady A’s “What If I Never Get Over You.”

“That’s two country songs in a row for you. Have you made a decision here? Are you going country here?” Shelton asked, before applauding her “great genre selection.”

Clarkson clapped back, “She’s been country since the Blind (auditions). … He drinks some times.”

Team Clarkson is rounded out by Desz (who sang Tina Turner’s “What’s Love Got to Do with It”), Tanner Gomes (Luke Combs’ “Lovin’ On You”) and Cami Clune (INXS’ “Never Tear Us Apart.”)

Shelton, however, is confident that HIS country singers will reign victorious.

Ian Flanigan, who sang Adele’s “Make You Feel My Love,” earned a standing ovation from the coaches. Shelton praised: “When have you ever in your life heard a voice like that? Recognize it and reward it!”

Team Shelton is rounded out by trio Worth the Wait (The Judds’ “Love Is Alive”), Papa (Carly Pearce and Lee Brice’s “I Hope You’re Happy Now”) and Sid Kingsley (Leon Bridges’ “Beyond”).

“I know America is going to vote for you because how can you not vote for a woman that’s doing something like that on that stage?” Legend said after Jade brought the house down with a unique rendition of Gnarls Barkley’s “Crazy.” (CeeLo Green was an inaugural coach on “The Voice.”)

Team Stefani is composed of Payge Turner (*NSYNC’s “It’s Gonna Be Me”), Ben Allen (Kenny Chesney’s “There Goes My Life”), Joseph Soul (Bee Gees’ “How Deep Is Your Love”) and Carter Rubin.

Rubin, the youngest singer remaining in the competition, blew the coaches away with a soulful rendition of Mariah Carey’s “Hero.”

“I’m just going to wipe the tears, because I’m just so honored to get to know you,” Stefani said to her powerhouse singer. “You are so talented. He just turned 15.”

The singers’ fates are up to America. The results of overnight viewer voting will be revealed during Tuesday’s live show (8 EDT/PDT), where the field of 17 will be narrowed to 9.

“The Voice” continue Tuesday at 8 EST/PST on NBC.