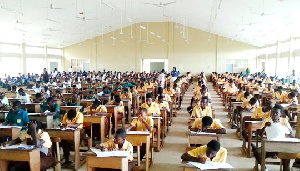 A Coalition of Pre-tertiary Education Unions have kicked against the continuous stay of final year students in school as the decision could trigger possible spread of COVID-19 (coronavirus).

“We plead with government to include Junior High School (JHS) and Senior High School (SHS) candidates in the closure of the schools to avert all imminent spread which could befall our beloved students, their parents, guardians and entire Ghanaian people,” a joint statement issued by the group at a news conference in Accra yesterday said.

General Secretary of the GNAT, Thomas Tanko Musah, who addressed journalists on behalf of the coalition, argued that the safety of students while in school was not guaranteed as social interactions and movements could not be limited and that put students at risk.

According to him, “schools could be incubation centres for the coronavirus” taking cognizance of the fact that cultures like handshaking, touching of face among others could continue in the absence of teachers.

“We call on government to engage the West African Examination Council (WAEC) member states to consider a possible change in the timetable,” he maintained.

Following the confirmation of six cases of COVID-19, all being imported cases in the country, President Akufo-Addo in a public announcement on Sunday banned all public gatherings for the next four weeks to prevent further spread of the disease.

He directed that all “universities, Senior High Schools and basic schools both public and private be closed effective Monday, March 16 till further notice.”

With the exception of BECE and WASSCE candidates who were permitted to attend school in preparation for their final examination, all others were to be home as the Ministries of Education and Communication collaborate to roll out distance learning programmes.

The public gatherings banned include conferences, workshops, funerals, festivals, political rallies, sporting events and religious events such as services in churches and mosques though ceremonies like private burials could proceed but with only 25 people in attendance.

While insisting that governments travel advisory issued earlier be observed, the President stated that “businesses and other work places can continue to operate but should observe prescribed social distancing between patrons and staff.”

COVID-19 is a new form of coronaviruses that is associated with respiratory disorders and characterised by symptoms such as fever, sore throat, runny nose and breathing difficulties.

To prevent contracting the infection, members of the public are advised to adhere to precautionary measures including regular washing of hands with soap under running water and the use of alcohol-based hand sanitisers.