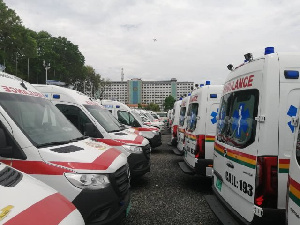 Information available to Graphic Online indicates that distribution has been slated tentatively for Monday, January 6, 2020.

The fleet of ambulances (Benz), part of which have been parked in front of the State House in Accra for a considerable time now, became topical late last year following President Akufo-Addo’s explanation that government was awaiting the delivery of the full complement of the fleet before dispatching them to the constituencies.

He said the plan was to avoid complaints of bias on the part of government if only part of the promised 275 was distributed. He was responding to a question by a journalist during a media encounter at the Jubilee House.

Over the yuletide however, batches of the ambulances were seen running up and down the Tema Motorway for registration, while technicians from TrackerHome were busily fixing trackers on the ambulances at the State House.

There were other workers who were fixing name tags (constituency names) and other decorations when Graphic Online visited the State House to ascertain why the ambulances were hurrying up and down the Motorway.

“We are getting them ready for inauguration. They say the date is very near”, said one of the technicians from TrackerHome.

The distribution will be in fulfillment of a key Election 2016 campaign promise by the New Patriotic Party to provide an ambulance for each constituency and to revamp the national ambulance service to improve health delivery.