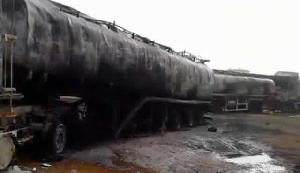 BOST depot at Buipe got burnt on Friday

An investigative committee has been set up to look into a fire incident near a depot belonging to the Bulk Oil Storage and Transportation Company Limited (BOST) at Buipe in the Savannah Region on Friday.

Government Relations Manager at the Buipe depot, Mr Yaw Antwi-Dadzie, told the Ghana News Agency (GNA) that the committee will ascertain the true cause of the fire that burnt down four fuel tankers and their contents.

Mr Antwi-Dadzie said the committee comprised representatives of the Ghana National Fire Service, technical staff at the depot, drivers of the vehicles involved and their mates and the Health, Safety, Security Environment and Quality Unit of BOST.

The General Manager in charge of Corporate Communications and External Affairs at BOST, Mr Marlick Adjei, also told the GNA that the terms of reference will include ascertaining why the vehicles had loaded products and were still parked at the port.

The committee, he indicated, would also probe whether all safety formalities were adhered to at the depot and make the necessary recommendations for action.

He explained that the police would be invited when the report suggests a criminal act has been committed.

Meanwhile, officials of the Ghana National Service said they can neither confirm nor rule out a terrorist plot or arson in Friday’s inferno that struck close to the BOST vehicular port.

Three persons were injured during the accident. One has been discharged from the Buipe Polyclinic, one still on admission with visible signs of inflammations while the third one was transferred to the Tamale Teaching Hospital.

Three of the vehicles contained petroleum products while the other one was empty.

Mr Kofi Owusu Appiah, Manager, Safety, Health, Security, Environment and Quality at BOST said the GNFS had been directed to blanket the residual products from the burnt vehicles to cut off oxygen from the residual as part of measures to preempt further damage.