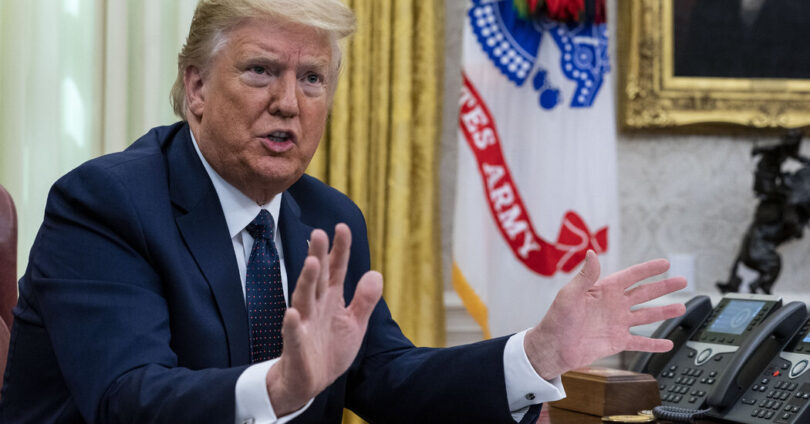 WASHINGTON — The Trump administration asked the Federal Communications Commission this week to narrow its interpretation of a law that shields internet platforms like Facebook and YouTube from certain lawsuits over the content they host.

The request, which stems from an executive order President Trump signed in May, is part of a growing push by the president and his allies, who say that tech companies are removing or suppressing conservative content. Despite evidence that conservative sites and figures perform well online, the president, along with much of his conservative base, have repeatedly criticized the platforms over instances in which conservative content was removed or otherwise moderated for violating a platform’s rules.

In a petition on Monday, the Department of Commerce asked the commission to clarify that the law, known as Section 230, does not protect a platform when it moderates or highlights user content based on a “reasonably discernible viewpoint or message, without having been prompted to, asked to, or searched for by the user.” It would also limit the circumstances under which platforms are protected from liability over their users’ content.

Kayleigh McEnany, the White House spokeswoman, said in a statement on Wednesday morning that the president wants the F.C.C. “to clarify that Section 230 does not permit social media companies that alter or editorialize users’ speech to escape civil liability.”

The petition is now in the hands of the F.C.C., an independent agency currently led by a Republican chairman, Ajit Pai, who was appointed to the position by Mr. Trump. “The F.C.C. will carefully review the petition,” said Brian Hart, a spokesman for the commission.

The request comes as the chief executives of Google, Facebook, Amazon and Apple are scheduled to testify before the House Judiciary Committee on Wednesday. While the hearing is part of the panel’s ongoing antitrust investigation into the companies, it is likely that some Republicans on the committee will ask the executives about how their platforms treat right-leaning content.

Mr. Trump’s petition is the latest twist in an ongoing debate in Washington over the future of Section 230, a provision of the Communications Decency Act which has long protected platforms from certain types of lawsuits over user-generated content. It also protects platforms from being sued over how they moderated content they find objectionable.

In 2018, lawmakers approved a measure eliminating the liability shield in cases where a platform knowingly facilitated sex trafficking. They have proposed other modifications to the protections in recent years but have not passed any of them.

Mr. Trump signed the executive order days after Twitter added information to refute the inaccuracies in two of Mr. Trump’s posts for the first time. Experts have said that the order, which also asked the government to review its spending on social media advertisements, would be difficult to enforce.

Internet companies and their allies in Washington have criticized the order, saying that it would gut a crucial protection for speech online. Twitter said in May that it was “a reactionary and politicized approach to a landmark law.” The companies also argue that changing the law could make it harder for them to moderate concerning content.

In June, the Center for Democracy and Technology filed a lawsuit against the executive order, arguing it violated the First Amendment. Emma Llansó, the director of the organization’s Free Expression Project, said that the petition filed Monday was “simply the next egregious step in the President’s unconstitutional campaign to intimidate social media platforms that are responding to hate speech and voter suppression online.”