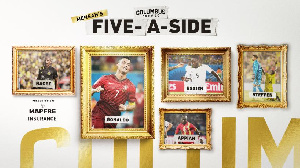 Mensah explained the reasons for choosing each player for his team

Mensah explained the reasons for choosing each player for his team.

“Number one for me is Zack Steffen. He’s been incredible for [Crew SC], he’s been instrumental for the U.S. Men’s National Team and still only 25-years-old now, so he’s got great potential. I got the chance to play with him for three and a half years and I saw him grow and I can say boldly that he’s one of the best young goalkeepers in the world,” he told Columbuscrewsc.com for his choice of goalie.

“Number two is Cristiano Ronaldo. [He is] one of the best football players ever, and to be able to play against him and contain him for the maximum period of the game, I think it was such an incredible feeling playing against one of the best ever to play the game,” Mensah said of the Portuguese who he played against at the FIFA World Cup in 2014.

“He’s a former Black Stars World Cup team member. He’s one of the great captains ever for Ghana, and it was great to play alongside him,” he explained for including Stephen Appiah.

“Big guy. He won a Champions League, Europa League, a Premiership championship and a couple of FA Cups, so playing with someone like him is such a great honor for me,” he said about Michael Essien.

And finally on Darligton Nagbe, he said,”We all know the qualities he possesses, and the way he uses them on the field is just incredible, so he definitely is going to be on my top-five. [Laughing] It’s good to have him on my team because playing against him – [the Crew] and the whole league knows his quality – and if I’m going to have him on my team, that would be a great opportunity for me and my team.”