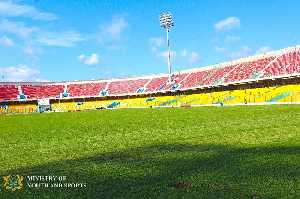 Pitch presentation and playing conditions need to be of the highest quality for professional football matches.

Not only must players be able to perform to the best of their abilities on a smooth and stable playing surface; it is also important to ensure that matches are not compromised by a pitch’s inability to cope with adverse or challenging weather conditions.

Football researcher Robert Griffin once said: “Every time you step on the football field in between those lines, you’re putting life, your career, every single ligament in your body in jeopardy.”

The football field is a very important component of the game. The beauty of the game, as well as the security of the players, greatly depends on the nature of the football field. Football pitches should be immaculately maintained to provide the best playing field.

In Ghana, the Club Licensing Board (CLB) of the Ghana Football Association (GFA) approves venues for the premier league clubs in Ghana, after inspecting the venues proposed by the clubs across the country.

Before the start of the 2019-2020 Ghana Premiership League, the Club Licensing Board passed a clean bill of health for the various playing fields, however, it seems all is not well with some of the pitches.

According to reports, three snakes were killed at the Carl Reindorf Park on Sunday during a league match between Liberty Professionals and the Hearts of Oak, raising questions over the safety situations at the venue, according to 3news.com. The fans reportedly killed the three reptiles on three separate occasions, creating fear and panic during an ecstatic football duel.

The game, which ended in dramatic fashion, had its scary moments, as the fans were apprehensive over whether there were more snakes to deal with.

It is not known where the dangerous reptiles emerged from, but it is believed they came from the nearby bushes. The presence of such reptiles means the pitch is not suitable and a major health risk.

Liberty have been using the stadium for some years now, and this is not the first time fans have been put in a scary moment by snakes during a league match.

Before the start of the season, the CLB inspected al venues for approval, but it looks like they got it wrong with Liberty’s home ground.

The park is partly surrounded by bushes, which makes it obvious that more dangerous reptiles are housed in there.

The Chronicle wants to ask whether the various stadia and football clubs across the country have a ground keeper responsible for the successful delivery of the pitches used for matches and training sessions. The importance of this job cannot be overestimated, as the ground keeper’s abilities to will be on public display through the appearance and performance of the pitch.

According to UEFA, it is recommended that every stadium has a direct employee, with qualifications and/or experience in turf management to oversee the field’s operations and performance. UEFA is known to appoint turf consultants for specific matches and provide ongoing pitch monitoring through the UEFA Pitch Quality Support Programme.

Indeed, most Ghanaians who follow the European leagues through the magic of television can bear testimony of the lush ambiance of the playing fields. No wonder the appetite for the European leagues keeps growing with the debilitating effect of killing interest in the local league.

The Club Licensing Board of the Ghana Football Association must sit up and avoid the recurrence of the sad spectacle witnessed at the Dansoman Carl Reindorf Park.