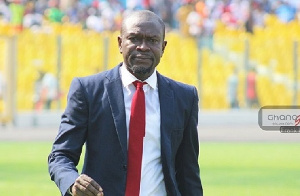 CK Akonnor is in the lead to be Black Stars coach

The favourite for the role, the Black Stars legend appears to be in pole position to replace Appiah according to reports in the local press.

He’s a familiar face to Ghana fans, having amassed 41 caps for the national time during a playing career in which he also captained the West African giants.

His fine career took him to Germany—where he represented Wolfsburg among others—and has taken in stints with Ghana’s ‘big three’ Hearts of Oak, Ashanti Gold and Asante Kotoko since hanging up his books.

Currently a free agent after leaving Uzbekistan in September, the Argentine coach knows the African context well having guided Egypt to the Africa Cup of Nations and to the World Cup in 2018.

His time with the Pharaohs ultimately ended in disappointment, which has overshadowed the good work he did with the North African giants, restoring them to the pinnacle of the African continent.

The coach’s agent has confirmed to local sources that the ambitious coach is interested in the role, and is particularly drawn to the vacant post in light of Kurt Okraku’s arrival.

Cuper has previously been employed by Internazionale, Valencia and Parma.

According to local sources, Al-Ahly boss and former Switzerland international Weiler has already held talks with the GFA about replacing Appiah.

This Swiss has recently taken his first steps in the African game following stints in his homeland with Luzerne and Aarau, as well as in Germany with Nurnberg.

He was a Belgian champion with Anderlecht, and was appointed by Ahly in August 2019.

It would be a surprise if the Black Stars were able to snare the coach so early into his tenure with the Cairene giants.

The son of a Ghanaian postman, Hughton spent 13 years at Tottenham Hotspur before spells with West Ham United and Brentford, and also represented the Republic of Ireland at the 1990 World Cup.

He’d represent something of a fantasy appointment, but the Black Stars job might be an appealing prospect for the 61-year-old, who has struggled to find new work since being dismissed by Brighton & Hove Albion in May.

Frenchman Gasset, in an interview with L’Equipe, has revealed his desire to break into African coaching and take control of an international team; could the timing be perfect for the Black Stars?

“An Africa Cup of Nations would be a crazy thing to experience,” he told the French source. “Becoming a national team coach would offer the right mix, a good compromise between my love of football and my family.”

Gasset lacks the African experience, but does he have the pedigree?

Most recently Saint-Etienne coach, the 66-year-old was previously assistant to the French national team, as well as Paris Saint-Germain, and has previously held the reins at his beloved Montpellier.