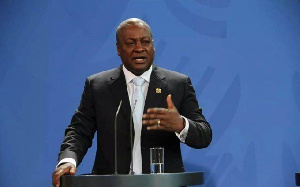 To teach children to avoid corruption and other forms of theft in their adulthood, the flag bearer of the main opposition National Democratic Congress (NDC), Mr John Dramani Mahama, has said he will introduce civics and responsible citizenship as a non-examinable stand-alone subject in the basic and second-cycle education system if elected President this year.

Addressing members of the Ahmadiyya Muslim Jamaat at their Annual National Convention on the theme: “Corruption – A threat to national development” at Pomadze near Winneba in the Central Region on Sunday, 5 January 2020, Mr Mahama said: “Quran Chapter 4 vs 58 talks about respect for public trust and it enjoins us and calls on us to uphold the trust that has been entrusted to us.

“Apart from the moral teachings against corruption and theft in our churches and mosques, the awareness of our children about wrongdoing and irresponsible living must be inculcated in them through the school curriculum as they grow up and study.

Mr Mahama further noted that Ghana has all the laws in its statute books to fight corruption but the lack of political will to enforce them is what has become a setback in the corruption fight.