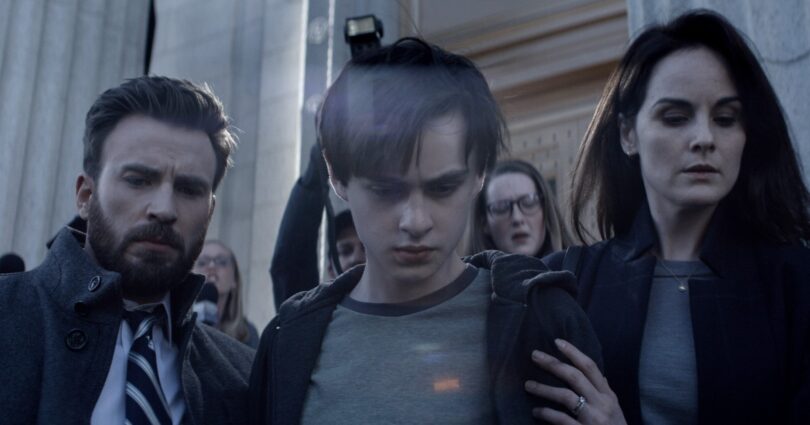 A breakout success for Apple TV+ in the streaming service’s first year of existence, “Defending Jacob” centers on a Boston family struggling with the emotional ups and down of their seemingly docile teenage son being tried for murder. It was a rare venture into television for Chris Evans, who plays Jacob’s father, Andy, as well as the Jacob in question, portrayed by “It” franchise star Jaeden Martell. Coincidentally, it was the second high-profile project in a row they collaborated on.

“I found out that I was doing ‘Defending Jacob’ while we were shooting ‘Knives Out’ and that was really exciting to know that we were going to work together again,” Martell says. “We got to talk about the story a little bit and talk about our characters and just get comfortable with each other. ’Cause I think it’s sometimes hard to fake chemistry in a film or in a TV show. It felt natural. We got lucky, for sure.”

An adaption of William Landay’s popular novel, Evans was sold on the limited series by writer Mark Bomback and Oscar-nominated director Morten Tyldum. He was still shooting Rian Johnson’s murder mystery hit when, as an executive producer on the project, he was sent a number of audition tapes of the top contenders to play his onscreen son. When he watched Martell’s submission, Evans initially thought the young actor was courageous for improvising part of the scene.

Evans recalls, “Then I saw the next kid, and he’s doing the scene and the lines were the same, and I said, ‘Wait a minute, was that scripted? That scene that I just watched, was that not improvised?’ If you can make your audience believe that it’s improvised, not scripted lines, that’s a testament to his presence. I thought he was making it up as he was going. That’s how good he is.”

Committing to “Defending Jacob” was “tricky” for Evans because he was given only the pilot and taking a “leap of faith” on the following seven episodes. He admits it was a “little intimidating,” but also somewhat familiar.

“In a way, it almost had that Marvel feeling, because obviously with Marvel you have a contract and you have a movie coming, but you don’t know what that movie will be,” Evans says. “So, I know the feeling very well of being sent a script and saying, ‘OK, well, if I don’t like this, it’s not a matter of saying I’m not doing it. It’s a matter of saying, how do you fix it?’ Luckily, every time I’d finished a script [for ‘Defending Jacob’] I’d say, ‘Man, that’s another great script out of Mike Bomback. The guy really knows what he’s doing.’”

Four-time Emmy nominee Michelle Dockery came on board as Jacob’s mother Laurie, a character who has a hard time keeping herself centered after she begins to believe the accusations against her son might be true. Dockery was grateful the project had three weeks of prep and table rehearsals to help flesh out Laurie’s emotional journey. With Bomback’s adaptation making some major changes from the book, it was almost a benefit for the London native that the last script didn’t arrive until shooting was about to begin.

“We have a sense of control as human beings, and it was interesting pacing out those moments,” Dockery says. “Like, ‘When is she really going to lose it here? When is she holding it together?’ I lost sleep on this job because it required for me to go to those emotional places, and I certainly had to look after myself.”

Dockery recalls by the time the production moved to Mexico, “I was happy and smiling, and it was odd playing the scenes where there was no intensity or drama. It actually felt quite unusual. I’m like, ‘Oh, I’m actually smiling in this scene, that feels weird.’”

Both Evans and Dockery were 38 at the time of shooting, but this was the first time the former had played a parent on screen, let alone the father of a teenager. The “Avengers” franchise star insists that he “loved it,” however.

He notes, “I’ve been saying throughout this whole press [tour], I have such a wonderful relationship with my father and just the physicality of opening a bedroom door at night and saying, ‘OK, buddy we’re going to bed. Lights out in 10,’ or something like that. Just little moments like that felt really sweet. Made me want kids really.”

The big mystery that hangs over “Defending Jacob” is whether Jacob killed his classmate or not. As the father, Evans seems to never doubt his son’s innocence. As Jacob’s mother Laurie, Dockery has her suspicions. And the series never makes it clear.

“I’ve been watching reruns of ‘The Sopranos’ and I’d forgotten that [cut to black] ending, that they just left so open, and it’s left to the audience to decide what happens next, and what were they really thinking. So that was important for us that there wasn’t any definite choice that was made,” Dockery says. “I didn’t want to confuse it by playing certainty in that scene. But I think because Laurie gets to a point where she’s like, ‘I’ve had enough, and this is what I think,’ in a way, I think that is a very poignant moment because it creates this divide between her and Andy as well. Because really it’s also about a marriage that is suffering as a result of this incident. I think that’s actually explored a lot in this, how it affects the marriage.”

Martell says he was given the freedom to form his own opinion about Jacob’s guilt. The producers, he says, wanted the way they shot the story to be the same whether or not he did it. “I think whether or not he did it, he’s still the same character. He’s still a normal kid in a very insane situation. So for me, the only time it affected me was to know whether or not he was lying. And the audience can’t tell because either he’s a really good liar or he’s telling the truth. Either way, it looks the same on the outside, but it changes for me internally,” Martell says.

The actor says he did make his own decision about Jacob’s guilt in order to play the character. A choice he’s still keeping to himself. For Dockery, the fact it’s not so “black and white” is something she appreciates about Bomback’s creative direction.

“We all made our decision I think as to what we thought,” Dockery says. “What I think is so great about the adaptation of the book is that it is ambiguous. I think people will walk away from this having their own opinion as to whether he did it or not. I think that’s more interesting than something being so finalized, tying it up in a bow and saying that’s it. I think it’s more interesting to have something that’s left open.”