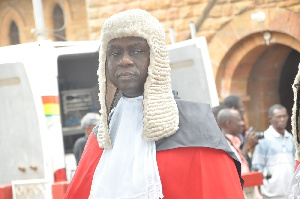 The new Chief Justice of Ghana, Justice Anin Yeboah has pledged to tackle pertinent issues facing the judicial system in the country, including challenges that have to do with legal education.

President Akufo-Addo on Tuesday, January 7, swore in Justice Anin Yeboah as the 14th Chief Justice of the Republic of Ghana.

Speaking after he was sworn in, the Chief Justice promised to among other things, continue to uphold the integrity of the Judiciary by fighting corruption.

“During my vetting by Parliament, it was evident that the following issues concerning the Judiciary were of concern to the representatives of the people of Ghana; the integrity of the Judiciary and the continuing perception of corruption, delays in the justice delivery system, poor infrastructure of the courts and residences of the judicial officers, inadequate resources for the running of the judiciary and justice delivery system, and challenges surrounding the legal education in Ghana.”

“I want to assure the people of Ghana that I will continue to jealously guide the integrity of the Judiciary as my predecessors in office have done and would take all necessary steps to ensure that during my term of office, solutions are found to these issues of concerns,” he guaranteed.

On his part, President Akufo-Addo assured the new Chief Justice of his government’s support as he [Anin Yeboah] takes over the running of the Judiciary.

According to the President, he has confidence in the capabilities of Justice Yeboah and believes he will live up to expectation.

“I’m sure that Mr. Anin Yeboah will be an effective leader of the Judiciary, guard jealously its independence, bring honour to the Judiciary and to Ghana, and be a worthy successor to Chief Justice Sophia Akuffo. I expect decency, discipline, fairness, hard work, deep-seated respect for the rule of law, and the continuing modernization of judicial activities to be the hallmarks, too, of his era as Chief Justice.”

Months ago, the Ghana School of Law recorded yet another case of mass examination failure only months after a similar one was witnessed which saw more than half of the candidates for the Bar exams failing.

This time around, the mass failure was recorded at the entrance exams.

Of the nearly 1,820 prospective students, only 128 reportedly passed the entrance examination.

Due to the high failure rates, many have called for serious reforms in the country’s legal education regime.