Home » Charging electric cars is about to get a lot easier 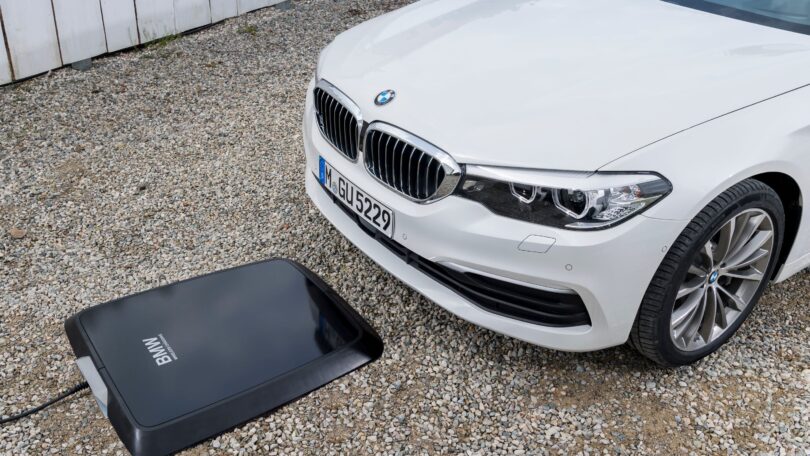 Owning an electric vehicle is about to get more convenient.

Automakers and suppliers from around the world have agreed to a system that makes it possible to charge electric vehicles and plug-in hybrids without ever actually plugging them into a wall outlet.

Luxury vehicles like the $57,900 BMW 530e plug-in hybrid and $2 million McLaren Speedtail are ready for the system now, but expect more attainable EVs to offer it soon.

A technology to simplify using a product hardly anybody has, wireless charging for electric cars may initially look like the answer to a question nobody asked. But it’s the kind of convenience people get used to fast, making it easier to own and use vehicles that are becoming increasingly common.

More important, the SAE International engineers association got an “astoundingly large” group of automakers and suppliers to cooperate to develop the universal charging system, the first step in making it affordable and easy for drivers to use, according to Ky Seal, who led one of the SAE committees that created the standard. Seal’s day job is senior principal engineer at Witricity, an MIT-bred company created to develop wireless charging for vehicles and appliances.

More: GM to bring 30 new electric vehicles to market in next 5 years

The BMW 530e iPerformance plug-in hybrid will be among the first vehicles available with wireless charging. (Photo: BMW)

The SAE — previously Society of Automotive Engineers — is responsible for creating most of the standards that help drivers figure out everything from which oil to buy to how big a trailer their truck can tow safely. The wireless power transfer (WPT) standard is SAE J2954, for those of you scoring at home.

Automakers won’t commit to when they’ll have the system on production cars, but engineers are quietly optimistic about offering it on mainstream EVs soon.

If you use wireless charging for your phone, you know how quickly having to plug in seems as old-fashioned and laborious as carrying a bucket of well water to your house. People will get used to wireless vehicle charging just as quickly.

The system delivers DC current up to 11 kilowatts at the maximum voltage the vehicle can accept over up to 10 inches of space between a pad mounted on the floor to a receiver on the vehicle. Charging efficiency is up to 94%, comparable to wired connections. The SAE is working on higher power levels for future passenger vehicles and heavy-duty applications like mining equipment.

‘Park and walk away’

The charging pads can be equipped to guide the vehicle into place, either at the driver’s control or autonomously.

The pads can be used at home or in commercial parking spaces. The plan is that an EV from any automaker could charge from a pad made by any supplier, at any charging station. That’s similar to the current hardwired system, where all automakers except Tesla use a standard plug to charge.

Electric vehicle owners already rave about the convenience of not having to stop for gas in the rain, wind and snow. Imagine how much more they’ll like it when they don’t even have to connect a plug to their vehicles at home.

“Charging your car should be as simple as parking and walking away. The wireless charging standard SAE J2954 gives freedom and convenience to do exactly that,” Jesse Schneider, chair of the SAE task force that created the standard, told SAE publication Automotive Engineering. “The standard is a game-changer by giving a ‘cookbook’ specification for developing both the vehicle and charging infrastructure wireless power transfer.”

There’s no indication yet of how much the systems will cost. Prices for wired home chargers have fallen rapidly, from above $2,000 in 2010 to less than $400 on Amazon today.

The SAE began research for the standard more than 10 years ago. The federal Food and Drug Administration has tested the system to make sure it doesn’t interfere with medical devices like pacemakers.