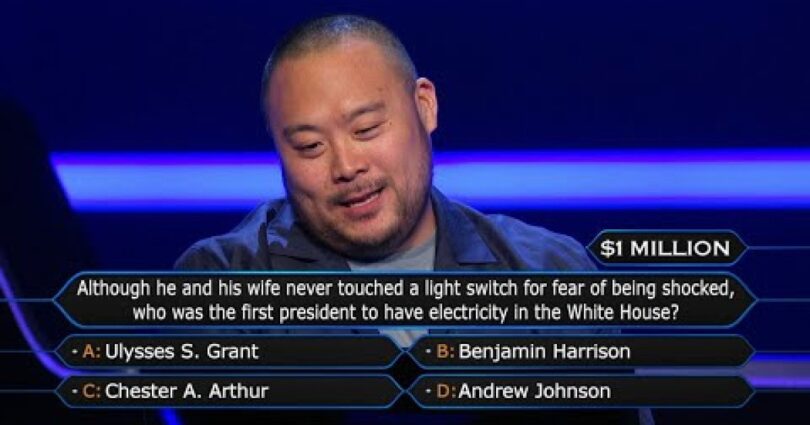 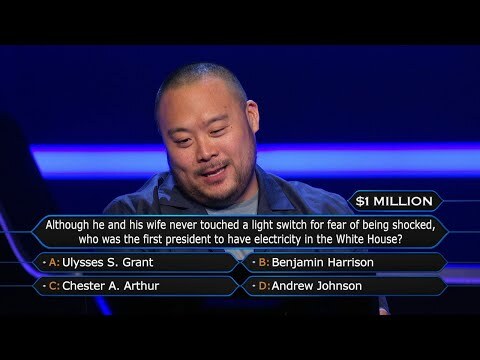 The host of Netflix’s “Ugly Delicious” and Momofuku founder became the first celebrity to win the grand prize for charity on ABC’s “Who Wants to Be a Millionaire?” on Sunday.

The Majordomo restaurateur defiantly gambled the $500,000 he earned for a chance at the elusive million-dollar prize, clinching the largesse for the first time in the show’s 20-year history. He did it to spotlight the struggling restaurant industry amid the COVID-19 pandemic.

Chang was competing for the Houston-based nonprofit Southern Smoke Foundation, which benefits the hospitality industry.

As the game show’s iconic heartbeat music played, Chang mulled over the million-dollar question with host Jimmy Kimmel, who like his predecessor, Regis Philbin, did little to elicit confidence in the contestant sitting in the hot seat. Then Chang let his “stupid confidence bravado win out.”

The question: “Although he and his wife never touched a light switch for fear of being shocked, who was the first president to have electricity in the White House?”

Chang was unsure and phoned a friend — NFL analyst and trivia buff Mina Kimes — for help. Kimes wasn’t all that confident either but was able to narrow down the multiple-choice field and said, “it’s probably [Benjamin] Harrison” before their 30-second phone call abruptly ended.

Still uneasy, Chang put his faith in Kimes’ suggestion, joking that he himself wasn’t even sure Harrison was a U.S. president, so he became a chef because he was a terrible student in school.

“I’m a gambling man — and shame on me if this is wrong —but I’m doing this. Because having a million dollars in this moment is a game-changer for many, many families,” Chang rationalized. “… it means more to me to get this right to put a spotlight on an industry in need.”

If he got it wrong, his half-million-dollar prize would have dwindled to $32,000.

But Chang got it right and made history on the show.

“When I got to the last question, I was so full of adrenaline I just decided to go for it,” Chang told USA Today.

The chef celebrated his win on Twitter, noting that his “gambling problem finally pays off.” He also praised his teammates Kimes and filmmaker Alan Yang (his expert guest) as the episode’s MVPs.

“I hope restaurants all across America give super soigne status to @minakimes . She’s no longer excommunicado,” Chang tweeted, thanking her and Yang “for being so much smarter then me!!! Always good to have friends that did well in school!!”

Yang, who directed “Tigertail” and co-created Netflix’s “Master of None,” joked that he “always wanted to hold a giant check on television” and celebrated their “Asian trivia dream team.”

Chang said he climbed into the hot seat after being a fan of the show for years. He prepared by playing through Kimmel’s first season hosting the show and by practicing with the quiz show’s app.

But his reasons for competing went beyond fun and games. On Twitter, he made a dig at the U.S. government’s response to the pandemic, namely the little aid he says it has given to the embattled restaurant industry.

“Since the government won’t help out restaurant workers…we have to do what we can to help out,” he wrote.