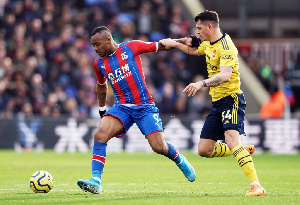 With the first round of games of Project Restart now done and dusted, there were a few winners and losers as the Premier League returned.

In the top-half, observers primarily focused on Chelsea – who defeated Aston Villa 2-1 – and Wolverhampton Wanderers – who beat West Ham United 2-0 – two sides that made great strides in securing Champions League spots…but nobody seems to be talking about in-form Crystal Palace.

The Eagles secured an impressive 2-0 success at Bournemouth, courtesy of goals from Luka Milivojevic and red-hot Jordan Ayew, seeing them pick up where they left off pre-pandemic.

Having won three games on the trot before football’s suspension, Roy Hodgson’s troops made that four successive league wins which sees them leapfrog wobbling Arsenal in the table.

Nobody’s paying attention to Crystal Palace making a late play for Europe. Four wins on the spin now puts them level with Spurs and four behind Man United and Wolves.

With eight gameweeks to play, Palace are ninth in the standings on 42 points and were, interestingly, one of the four sides in the top 10 to pick up a win in gameweek 30.

The excitement surrounding the Eagles’ amazing run is understood when their current situation is put in context: success at the Vitality Stadium put them level with Tottenham Hotspur in eighth, two behind Sheffield United and only four behind joint-fifth pair of Manchester United and Wolverhampton Wanderers.

Despite thriving in what has generally been a mixed campaign for most of the teams below champions-elect Liverpool, Palace haven’t been glorified for their achievements and seem to be flying under the radar.

For a club whose highest top-flight finish was 10th in 2014/15 and last year ended in the bottom half, this campaign’s transformation has been commendable.

Indeed, no player epitomizes the South London club’s success more than Ayew, who scored his ninth league goal of the campaign on Saturday. For a forward who could only find the back of the net once in 20 appearances in the previous season, his renaissance has been astonishing.

Supporters were unimpressed by the club’s decision to sign the forward permanently from Swansea City in the summer but the 28-year-old has rewarded Hodgson’s faith to propel the London side into the division’s top 10.

After coming up trumps on several occasions in the ongoing campaign, the same supporters started cheering his name at Selhurst Park before the sport’s shutdown in March.

It’s quite the turnaround for the youngest son of African football legend Abedi Pele, who registered only three shots on target from 17 attempts last term.

The forward is one goal away from joining Chris Armstrong (15 goals), Andrew Johnson (21), Christian Benteke, Milivojevic (10, 12) and Wilfried Zaha (10) as the only players to have netted double figures for Crystal Palace in their 11 campaigns in the big time.

If his well-taken effort against Eddie Howe’s team, as well as his three-game scoring streak either side of the pandemic, is anything to go by, Ayew is primed to become the sixth Eagle to hit 10 goals or higher.

For a side that has three more goals than lowest scorers Norwich City (28 to 25), the Ghana star’s return is even more remarkable. Given the low-scoring nature of Hodgson’s troops, nearly every strike from their top scorer this term has been of great importance.

Having hit the opener in a 2-1 success over Manchester United in August, Ayew followed that up with the winner over Aston Villa days later in a 1-0 victory. October brought even more joy for the West African striker who netted an 87th-minute winner at city rivals West Ham United before equalizing at Arsenal as the Eagles fought back from two goals down to draw 2-2 at the Emirates Stadium.

Both London clubs were on the receiving in the reverse fixtures too, with an incredible 90th-minute solo effort completing a 2-1 comeback win over the Hammers (he’d set up Cheikhou Kouyate’s leveller as well) and an equalizer against the Gunners making sure the Eagles would finish 2019/20 unbeaten against two London rivals.

A five-game drought followed Ayew’s goal against Mikel Arteta’s team, but that ultimately birthed his current scoring run which includes winning strikes over fierce rivals Brighton & Hove Albion and Watford, their last two games before the Premier League was suspended.

In a campaign where usual talisman Wilfried Zaha, scorer of three goals and as many assists, has somewhat underperformed, it’s been the Ivorian star’s teammate who has carried the can for Hodgson’s side.

This is evidenced by the fact that the Ghanaian’s goals have won Palace 12 points this term as they chase a maiden European sojourn that was unforeseen when 19/20 kicked off.

They don’t have an easy run-in, however, with games against Liverpool (Wednesday), Leicester City, Chelsea, Man United, Wolves and Tottenham on the final day to come in the final weeks of the season.

If the Eagles are to play continental football in 2020/21, they’ll have to secure several positive results against the sides fighting for the same goal as them. All these teams are superior to the ninth-placed side for technical quality, a factor taken into cognizance when playing down their chances of securing a top six finish.

Still, their 2-1 win over the Red Devils (the first at Old Trafford since 1989) and 2-2 draw at Manchester City in January gives them a reason to be bullish going into a thorny climax to the season.

Palace are likely the most unglamorous side in the top-half, but with the wily old Hodgson at the helm and Ayew’s prolific campaign could gatecrash the European party against all odds.