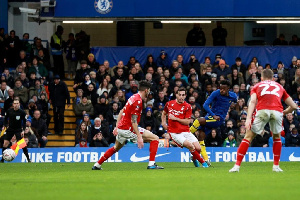 Callum Hudson-Odoi was in inspired form as he scored and created another to help Chelsea beat Nottingham Forest in their FA Cup third-round tie.

The hosts only needed six minutes to score as Hudson-Odoi cut in from the right and shot into the bottom corner.

Forest, fourth in the Championship, were then awarded a penalty but, after a lengthy video assistant referee delay, the decision was reversed.

Chelsea soon had a second goal when Hudson-Odoi’s shot was parried with Ross Barkley scoring from close range.

Chelsea will be pleased with Odoi’s performance today and will hope he replicates it in subsequent games.

The winger has struggled to impress this season, especially in Premier League games. Despite the criticisms, manager Frank Lampard has remained confident in the 19-year-old