Home » Calls for monuments to migration, a massacre and an LA tree 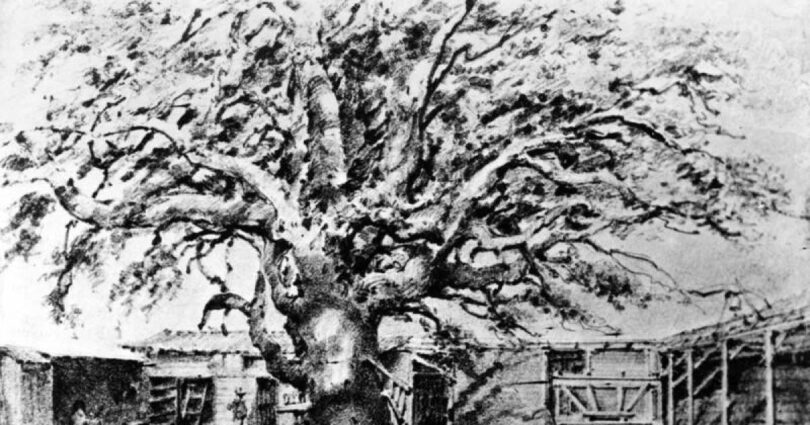 Monuments come down. Monuments go up.

In my reporting for a feature story on monuments — “Goodbye guy on a horse. A new wave of monument design is changing how we honor history” — I spoke with artists, designers and scholars around the country about how monument design is evolving. In the process, I asked them what ideas, people or historical events they would like to see memorialized by a monument.

Their ideas not only spanned the continent but also fill some important historical gaps. Here are five of them — along with a sixth by yours truly (featuring a famous Los Angeles tree):

Rebeca Méndez, design firm founder and UCLA design media professor, is part of the team (along with L.A. landscape architecture firm Chee Salette) working on a memorial to the 2011 mass shooting in Tucson, Ariz., that left six dead and 12 wounded, including former U.S. Rep. Gabrielle Giffords.

Driving very close to the border I see the wall, and it drives me crazy because it’s killing people. So, migration as a new attitude of survival. What’s interesting about a monument to migration is that it could be not one, but thousands of them.

Ken Lum is an artist, curator, scholar and founder of Monument Lab, a group that has been examining ideas of civic memory since 2012. He teaches at the University of Pennsylvania.

In New Jersey, there was what was known as the “Radium Girls.” When I was a kid, clocks would have glow-in-the-dark numbers and arms. That was almost entirely done by the U.S. Radium Corp. using radium. They would hire young girls, some from Philadelphia and Trenton, because they had fine hands, and they would paint radium on the arms of these clocks. But radium is radioactive. They were given fine brushes and were encouraged to wet the brushes in their mouths. Many died very young — before middle age. These are histories that need to be remembered.

The Chinese Massacre of 1871

William Deverell, a professor of history at USC, says it’s time for the city to contend with the brutal killings of Chinese men and boys (accounts vary from 17 to 20 ) by a mob that ransacked Los Angeles’ Chinatown after a conflict between Chinese immigrants resulted in the death of a popular former saloon owner.

Something that is pretty high on my list is [honoring] the victims of the Chinese Massacre of 1871. It’s one of the largest massacres of Chinese people in American history, and it happened right here. This notion that we can just assign this to a Wild West past or that it was the 19th century and the rough-and-tumble era of the frontier — it doesn’t work.

This is the origin point of modern Los Angeles. People knew what they were doing is committing an atrocity. Right now, this event is marked by a plaque near the Chinese American Museum. That is an important act. But it ought to be marked in a more powerful way. A wider reckoning is called for.

Jeanne Gang is an award-winning architect and founder of the architectural studio Studio Gang in Chicago. Among her projects is the Aqua Tower in Chicago and an ongoing redesign of the lands along the Memphis riverfront.

The whole labor history of Chicago. There is nothing in the landscape that really explains that. It involves workers, police and the captains of industry — these different groups. And they all disagree on the history of it. But it’s such an important place for that history. There is a labor history trail, but often there is nothing left to look at. You go to a place where there was a gigantic factory, and now there is nothing there. So some way of marking that. It would be interesting because it has these different perspectives, and they could be revealed and explained in different places.

Cameron Shaw is the deputy director and chief curator at the California African American Museum in Los Angeles.

When I start to think about the types of monuments that interest me, it’s the collective ancestor altar. That is a form known by Angelenos: a public, large-scale site where people can honor the people who came before us, the Native land, the people who came after. That’s something we see throughout the city and, because of celebrations like Día de los Muertos, it’s very familiar.

In my mind’s eye, it has photographs, it has screens that play images of folks’ ancestors, multiple artists contribute to the vision, and there is a pilgrimage piece in which Angelenos can come from all over and contribute many different images and many different rituals.

Joel Garcia is part of a group of Indigenous activists who pressed the county of Los Angeles to remove a statue of Christopher Columbus from Grand Park. When I interviewed him for my story, he told me that a monument to the Indigenous experience could be more than a statue; it could be a grove of oak trees or letting a piece of land “revert to its natural state.”

Taking some inspiration from that idea, I want to nominate a specific Los Angeles tree for memorialization: El Aliso. The sycamore took root on the banks of the Los Angeles River around the time that Columbus was mistaking the Caribbean islands for the East Indies and was witness to centuries of Los Angeles history before being felled in 1895 as urbanization encroached.

For the Tongva and other Indigenous cultures that once inhabited the area, the towering “council tree” was an important marker and meeting site — a place where journeys began and ended. It was also a place where important Indigenous leaders were buried. (As is wont to happen in Los Angeles, the site was paved over by a freeway — the 101.)

In 2016, artist Christine Ulke created a luminous tribute to the tree on the exterior of the Division 13 Bus Maintenance and Operations building at East Cesar Chavez Avenue and North Vignes Street, across from Union Station. And last year, members of the Kizh-Gabrieleño tribe placed a sidewalk plaque in its honor at the intersection of Commercial Street and Vignes, near the site where the tree once stood, by an on-ramp to the 101.

“While El Aliso is long gone,” the plaque reads, “the shade it provided no longer available and the memory of the conversations under its branches long lost, its significance to the Kizh is not forgotten.”

Both of the existing markers are poignant but hardly bucolic. The latter is sandwiched between the freeway and the Deja Vu strip club. And the principal soundtrack to both is the roar of traffic and the frequent helicopters that take off from a nearby LAPD landing pad.

El Aliso gave us shelter, a place to sit and contemplate. Let’s build (or plant) a monument to that.