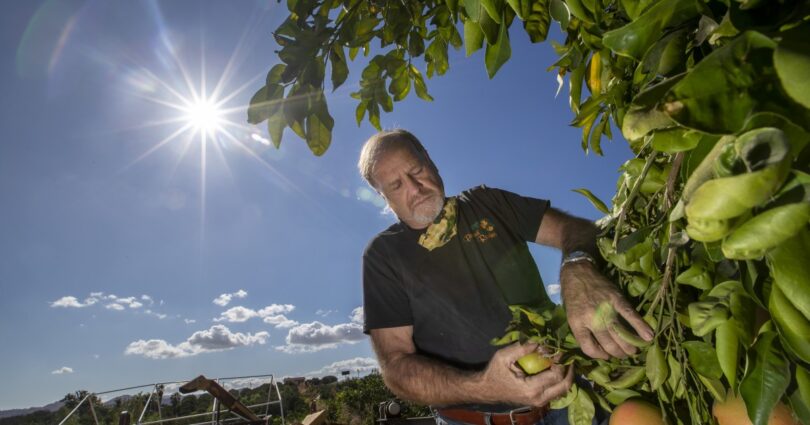 Vince Bernard loves his trees. He’ll tell you as much. They are what have sustained him and his family for decades at Bernard Ranches. Bernard grows mostly citrus with his wife, Vicki, in Riverside, where a pair of navel orange trees planted in 1871 marked the beginning of the area’s storied citrus industry.

Now, Vince Bernard is being forced to make some heart-wrenching choices. What if he can’t, because of declining sales due to the COVID-19 pandemic, afford the water to keep all his trees alive?

Sacrificing trees is like “cutting your arm off,” Bernard said, but the financial reality of COVID-19 has forced his hand.

“I can’t turn the water off from the trees and watch them suffer,” he said, gazing out at housing developments in the distance. “But I can call someone up and say, ‘Bulldoze this 5 acres.’” Bernard’s voice shook. “I come out and say a prayer. They’re gone.”

The novel coronavirus has wreaked havoc on every aspect of the food industry. It’s been particularly taxing on California’s smaller farms, some of which have seen their restaurant orders all but vanish and their farmers markets sales decline because of decreased foot traffic.

Surviving this crisis has meant being nimble, making difficult choices, and having to guess what the demand will be like six months or a year in the future. I spoke with four farmers who are fighting through the pandemic and doing what they can to make ends meet.

That can mean pivoting to other forms of business, like farm boxes, or rethinking what they’ve traditionally planted. It can mean working longer shifts or making the difficult choice to shed assets and fixed costs. It means depending even more on farmers markets, where growers forge personal and professional connections and which remain, despite the chaos of 2020, a dependable and much-needed lifeline.

But for most, it means more work for less money. And the farmers share a dogged hope that sooner rather than later, this country can turn a corner regarding the pandemic.

The thing that becomes immediately clear upon meeting Bernard is how much he enjoys his work. “We harvest all year,” he said. “The citrus is some of the best in the world — the climate is just perfect for it.” Bernard Ranches grows navel oranges, varieties of Valencias, limes, lemons and avocados over approximately 50 acres.

Bernard, who grew up on a dairy and has been farming citrus in Riverside since 1984, spends most of the hot summer months thinking about water and its increasing cost. “You usually get enough rain in January, February, March. April is dicey, maybe you’ll get a thunderstorm,” he said. “But June, that’s the end of that. No more water comes from Mother Nature. Water that comes is going to be from you.”

Sometimes, the water bill leaps from $2,000 per month into the tens of thousands in the blink of an eye. “Last year, we had one month where the bill was $32,000,” Bernard said. “The king couldn’t afford this.”

Compounding the water woes is the loss of business because of the pandemic. “It hit us really hard,” Bernard said. “All of our restaurant sales, hotel sales, small store sales, individual people, boom, it went to zero. We didn’t sell a box of lemons for March or April.”

The lack of revenue has forced Bernard to do the unthinkable: cull some of his beloved trees.

The trees, like people, have needs, he said, and they don’t stop requiring maintenance simply because fewer people are buying fruit. “They’re living things,” Bernard said. “They respond to care, they respond to lack of care. I look to these trees for inspiration a lot of the time.”

Bernard said that he’s had about 500 trees removed and that he will likely take out several hundred more. Despite the heartbreak of losing trees, Bernard said he’s determined to survive the pandemic, describing his attitude as “defiant.”

“Anybody can do this when it’s easy,” he said. “I choose to do it now just to prove myself that I can.”

Debby Takikawa and her husband, Shu, farm 66 acres for The Garden Of…, their business in the Santa Ynez Valley, and also have a small home farm. When the coronavirus hit, the toll was harsh and immediate. “Restaurant wholesale is about two-thirds of our business, and we lost about 75% of that,” she said. “It was an unimaginable hit.”

To make up for the lost revenue, the Takikawas began producing farm boxes for consumers, but that’s required substantially more work and virtually eliminated their profit. For a 24-piece box of exclusively Little Gem lettuce, she said, “we cut and pack in the field; it takes about three minutes to make a box.” The farm box, by contrast, “contains one of every single thing that we grow. The profit margin was nonexistent,” she said. “But it kept us going.”

Filling a farm box means growing nearly twice the variety of products they normally do, Takikawa said. That’s about 18 different things instead of the normal 10. “We had to completely change our planting schedule,” she said. “Little Asian greens and turnips and things that we could get out of the ground quickly.”

The farm also received a $250,000 loan from the government’s Paycheck Protection Program, which she used for payroll. The loan will likely be forgiven, per the program’s terms, which is something Takikawa is counting on (“If they don’t forgive the loan, we’ll go belly up. We’ll go bankrupt. I can’t pay it back.”). She emphasized how grateful she is for the money, but she is concerned about the possible financial burden that will come following an IRS announcement that ordinarily deductible business expenses won’t be deductible if paid with PPP funds.

Takikawa is socking away money and bracing for a possible tax bill. “That’s a lot of money. That’s like my total annual income.”

Right now, the 200 or so farm boxes per week that The Garden Of… sells are keeping the business afloat. Restaurant wholesale numbers are recovering, but Takikawa is bracing for a dip this winter. “The real concern is, ‘Oh my God. What are we going to do if we have a big spike [in infections] again?,’ she said.

“Just let that mask be a way of life and stop thinking about the day when you can take it off.” To get through the pandemic, “it’s going to take everybody playing the game,” she added.

In spite of the difficulty, Takikawa said she’s noticed the farming and food community banding together to make it through. (“There are people who will buy that extra box of lettuce.”)

“Anybody who has any kind of resiliency or resource has shared it,” she said. “Some people go under, and you see that and you can’t fix it. But I think people hold together in this kind of crisis.”

And making less than half your usual money doesn’t work as a business model. “You can’t cut half your costs,” he said.

He started doing farm boxes, but he recently stopped, deciding it just wasn’t worth it.

As a result of the uncertainty, Thao and his family, who work a 25-acre farm in Fresno, have taken a step back. They’re reducing late winter plantings — the cabbage, broccoli and cauliflower that you’d usually see. Instead of seven staggered plantings of a crop, they’ll do only four, and they’ll pick only what they can sell.

Thao doesn’t rent land or equipment, so he can take this time to be at home more — and think about what he and his family want, and what the future could hold.

Farming is in Romeo Coleman’s blood. His father started Coleman Family Farms in Carpinteria in 1963, and Romeo began working full-time on the farm in 1996. Even during this difficult time, he is thankful for the work he does. “I’m in the right business — people have to eat — I just have to work a little harder to find a way to get it to them,” he said.

I asked Coleman what the biggest help is as far as keeping people like him going.

“Just make sure the farmers markets stay open,” he said. Coleman attends the Wednesday and Saturday markets in Santa Monica and has nothing but praise for how they’ve handled the pandemic. “The management team there really worked their butts off to make sure it stayed open,” he said.

Coleman’s business model has made pivoting during the pandemic a challenge. He grows relatively small quantities of a large number of items, some of which are specialized: things like shiso, epazote, papalo and edible garnishes. “Borage flowers, that’s not something you’d usually see in a farm box,” he said.

Changing to be “a farm box farm,” as he puts it, takes time. “You can’t just go, ‘Oh, yeah, carrots. Let me get them for you here in my back pocket.’”

While his restaurant sales have recovered slightly, he said, he’s nervous about the recent tightening of restrictions in Europe. (“I don’t think that bodes well for us.”)

The farmers markets, he said, are the real lifeline for him, his seven full-time employees and four part-time employees. His table sales are “the same or better” as they used to be. Without that business, “we’re thrown out to the wolves, basically.”

But if the markets can stay open, regardless of whatever shutdown may or may not occur in the future, that will give Coleman a better shot at making it through this time.

Bernard Ranches sells at local farmers markets, including Wednesdays in Santa Monica, Saturdays in Pasadena and Sundays in Long Beach and Beverly Hills, and online at www.fruitguys.com. On Instagram @bernardranches.

Thao Family Farm sells at local farmers markets, including Saturdays in Santa Monica and Torrance, Sundays in Hollywood and Tuesdays in Torrance. On Instagram at @kongthao03.

The Garden Of… sells at local farmers markets, including Sundays in Hollywood, Saturdays in Santa Barbara and on Wednesdays in Santa Monica. On Instagram @the_garden_of_.