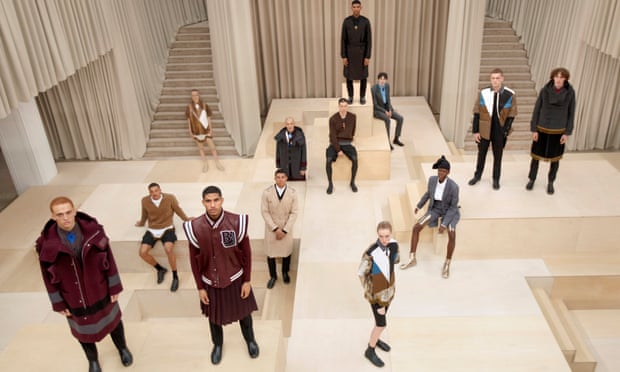 There were elegant pleated silk skirts and several of the models were women, but Burberry’s latest catwalk show – filmed in the brand’s empty and shuttered London flagship store and live-streamed as part of a digital-only London fashion week – was an entirely menswear collection.

In a Zoom call after the show, the designer Riccardo Tisci shrugged off any apparent contradiction as representing an outdated way of thinking about clothes. “Fluidity is a really important word to the younger generation,” he said. “They aren’t frightened of it, because they aren’t scared of their sexuality.”

Tisci also refuted the assumption that showing only menswear during London fashion week should be seen as shifting Burberry away from femininity. The appeal of femininity, he said, was no longer restricted to womenswear. “Actually I want to make Burberry more sensual, more soft. I think I can do that in a very powerful way by doing it in menswear.”

A charity partnership with the footballer Marcus Rashford, who starred in a recent Burberry campaign, has boosted the visibility of the company’s menswear. It now accounts for half of all sales.

“Camaraderie”, “freedom” and “the great outdoors” are the aspirational must-haves of 2021, according to Burberry. Models carried camping rucksacks, complete with rolled-up blankets. Some had umbrellas slotted behind the shoulder straps.

Tisci said he wanted to conjure up the mood of the progressive, open-air woodcraft groups that grew in popularity among young people in Britain in the 1920s, exploring alternative lifestyles centred around early environmental principles.

“It is a part of British history that feels relevant now,” he said. “Because in a way we’ve been through a war too. After going through so much negativity there is a need to be outdoors, with the sun and the sky.”

He had “been learning the English way to dress” at home in London during lockdown, he said. “I used to be always in black T-shirt, jeans, white trainers. But I always loved the eccentric English way of dressing, and now I’m wearing Birkenstocks and tracksuit bottoms and cashmere overcoats. There is so much character in the way British people dress in the street.”

Missing the “passion” of a live fashion week, he is hoping that shows return next season. “We just have to wait and see what’s allowed. But I’m dreaming of doing a catwalk show in Trafalgar Square, or at Buckingham Palace,” he joked.

London fashion week is taking place in an increasingly fractious political atmosphere. Frustration is building within the industry about a lack of governmental support for businesses negotiating the costs, difficulties and time delays brought about by Brexit.

Tamara Cincik, the founder of the Fashion Roundtable thinktank, described the double whammy of the pandemic and Brexit as a perfect storm for British fashion.

The UK Fashion and Textile Association estimates that about three-quarters of Britain’s clothing and textile exports, representing £9.6bn in trade, go to the EU. Designers including Katherine Hamnett and Alice Temperley have reacted with exasperation to the culture secretary Oliver Dowden’s suggestion that designers use their “star power” to tackle the problems caused by Brexit.

Hamnett predicted that “If there isn’t a radical overhaul, British brands will die”. Samantha Cameron, the wife of the former prime minister David Cameron and owner of the independent British fashion brand Cefinn, recently described post-Brexit trading conditions as “difficult and challenging”.