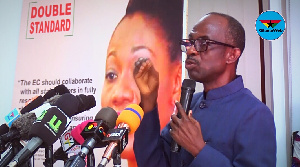 General Secretary of the National Democratic Congress, Johnson Asiedu Nketia, has said that the transfer of Former National Security Minister, Bryan Acheampong to the Interior Ministry is just a move to rig the upcoming elections come December 2020.

According to him, his reshuffle has given him the legitimate authority to deploy vigilante forces they have trained in the police service during the elections.

These actions he says justify their notion that Akufo-Addo is not ready to ensure that the upcoming elections is free and fair.

Speaking in an interview with Ghanaweb, the General Secretary said, “I believe that it is a cork in the whole orchestration to rig the elections because this is somebody who deployed task force to create mayhem at a by-election for which reason a commission was established, a commission came to declare that action unlawful and they recommended that the group should be disbanded, he himself should be punished and so on. One of the reasons of the recommendation is that the National Security had no role to play in election security.”

He added that Akufo-Addo has disregarded that Emile Short Commission which made recommendations about punishments for his role in the Ayawaso West Wougon by-election Mayhem.

“So now what Akufo-Addo has done is to tell the Emile Short Commission to go to hell to tell anybody who is worried about vigilantism and so on to go to hell and through this action is going to legitimize of Bryan Acheampong and give him the legitimate authority now to deploy the task force they have trained and embedded in the police service to now go and be deployed for elections security and you know what it means. If you have vigilante of one party that is contesting election being the one that are going to be deployed in the uniforms of Ghana Police service to go and take charge of election security it tells you that the president is not minded to go into any fair elections.” He said

Nana Akufo-Addo has reassigned two ministers according to a statement from the presidency signed by Eugene Arhin.

Reasons for their reassignment were not provided. Meanwhile, President Akufo-Addo has assured that he will do his best to maintain the democratic credentials of the country and work to promote free and fair elections in the 2020 polls.