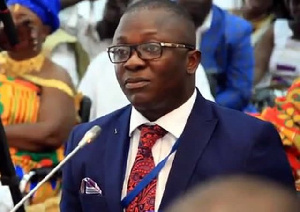 As is the norm in these contemporary times, most prophets tell their gathered congregants during the 31st night service what God has revealed to him in the coming year.

One of such prophets who has grown to become popular when it comes to Prophecies is Prophet Nigel Gaisie and just like Owusu Bempah, Nigel equally enjoys dropping some political prophecies.

At his 31st All Night Service to usher his members into the New Year, Nigel dropped some controversial prophecies one of them is “I saw a man by the name Acheampong holding the NPP flag, God will use him mightily in the NPP government.”

He also touched on the Black Stars, 2020 Elections, the presidency, Our security, plot of terrorism in Ghana, former first lady and former speaker of parliament among others.

Bryan Acheampong is a Ghanaian politician and Member of Parliament of Abetifi constituency in the Eastern Region. He is a member of the New Patriotic Party (NPP).

He succeeded Peter Wiafe Pepera, who died while in office He is currently a Minister of State at the Office of the President in charge of National Security.