Home » Breonna Taylor’s death shocked the nation but not Louisville 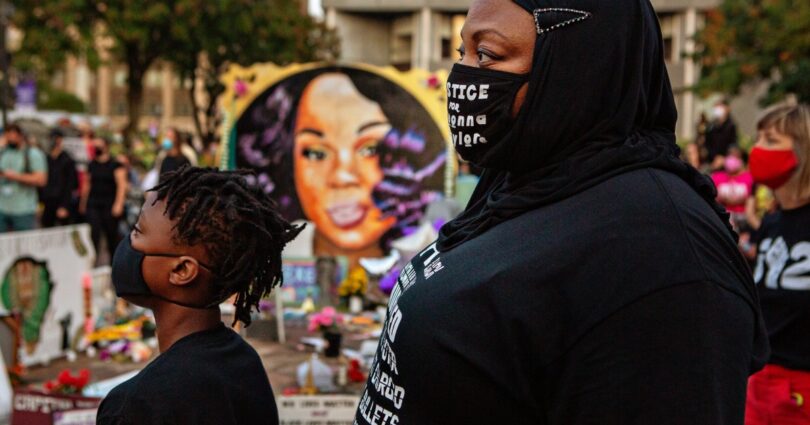 Before the shops downtown closed due to the coronavirus, then remained shuttered amid protests decrying police brutality, Tawana Bain’s restaurant exuded an air of bustling electricity. The sounds of Louisville college football and basketball games boomed from big-screen TVs, and customers gathered in large groups to catch up over bowls of bourbon shrimp and grits.

Now, plywood covers the windows, shrouding the eatery, Encore on 4th, in shadows throughout the day. But prior to 9 p.m., when the city’s recently introduced curfew kicks in, some of the old, familiar energy returns as Encore serves as a safe space for protesters who have marched through the streets of Louisville for more than 120 days demanding justice for Breonna Taylor.

Some protesters charge their phones here, and others grab a swig of water. Some nap on the floor, resting a bit before returning to the streets to chant for Taylor, the 26-year-old Black woman shot to death by police inside her apartment here six months ago. For Bain, transforming her restaurant into a sanctuary felt like a small way to offer balm to the many people like herself suffering in the city.

“What’s happened here in Louisville,” she says, “is yet another slap in the face of Black Kentuckians, Black Americans, everyone who cares about justice.

“It’s unfortunate, but, sadly, it has come to be expected, ” she said, referring to a grand jury’s recent decision not to indict officers for the death of Taylor, who was shot multiple times during a “no knock” search of her apartment.

Bain, and many other Black residents of this city nestled along the Ohio River, have a certain sad familiarity with feelings of marginalization and otherness — of watching in anguish as a system that vows to uphold justice so often falls short of its promise, harking back to images of a racist past that for some is still very present.

Prior to the Civil War, Louisville, at the dividing line between North and South, served as a stop for enslaved Black people who escaped the Deep South along what was referred to as the underground railroad.

Later, during Reconstruction and the Jim Crow era, many Black people continued to migrate through town on their way to larger cities, such as Cleveland and Chicago. Others stopped in Louisville and never left.

In the 1940s, boxing and human rights legend Muhammad Ali grew up in a tiny house on the west side of Louisville, a neighborhood that was, and remains, the predominantly Black part of town. Even now, the city’s downtown stands as a de facto dividing line — most Black people live to the west, and most white people live to the east.

“There is a known divide in this city,” said longtime resident Felicia Garr, who works in construction. “Go west and the economic development ends. It’s all churches, Dollar Generals and liquor stores. Head east and it’s all coffee shops and fancy, healthy grocery stores.”

Garr, 52, who has a daughter around the same age Taylor was, said she was devastated by last week’s legal announcement.

“I am shocked, saddened, hurt, you name it, that nothing has happened,” Garr said. “No respect for our community.”

In March, officers stormed into Taylor’s apartment at night and fired multiple times after her boyfriend, who did not know who was entering the home, shot and wounded one of the officers. (Several neighbors present the night of the killing have said that, although they heard loud pounding, they did not hear the officers announce themselves.)

Soon, Taylor’s name and image were painted on billboards and walls across the nation, and here in Louisville, protesters marched through the streets night after night chanting her name and demanding that criminal charges be brought against the officers.

But the local grand jury declined to hold any of the officers legally responsible for Taylor’s killing. One officer, since dismissed, was charged with wanton endangerment for firing rounds that struck neighboring apartments — a legal determination, critics say, that served as a further insult to the value of Taylor’s life.

“It follows a pattern of the blatant disrespect and marginalization of Black people,” said civil rights attorney Benjamin Crump, who is representing members of Taylor’s family. “But especially Black women in America.”

In Louisville, as in many American cities, the relationship between police and the Black community has long been fraught.

Two years ago, police here yanked Tae-Ahn Lea, 18, from his car after stopping him for allegedly making a wide turn. After he’d waited in handcuffs for nearly 20 minutes while officers searched the vehicle with a drug-sniffing dog, Lea’s mother arrived on the scene and asked officers what was wrong. Body camera footage shows an officer telling her they are a part of a violent crime unit.

The video of Lea, a homecoming king, being searched for drugs and weapons —- there were none — went viral on social media.

The family has since sued the department.

Meanwhile, several Black motorists have filed lawsuits against the department alleging a pattern of discrimination, and in June, Louisville’s mayor fired Police Chief Steve Conrad following the killing of restaurateur David McAtee during a police response to a curfew violation.

In the early morning of June 1, peaceful demonstrators, protesting the deaths of Taylor and George Floyd, a Black man killed by police in Minneapolis, huddled outside McAtee’s west-side barbecue stand. Local law enforcement and National Guard approached and fired pepper balls, forcing people to flee inside the restaurant. Based on surveillance video footage, McAtee was holding a handgun and stepped outside and fired. He was then struck by a hail of bullets from police and National Guard.

Local leaders called for the release of police body-camera footage, but Louisville Mayor Greg Fischer announced that officers on the scene had not activated their body cameras.

In the six months since Taylor’s death, local elected officials have enacted a ban, known as Breonna’s Law, on “no knock” warrants like the one officers used to force their way into her residence. The city is also in the process of creating an independent civilian police review board with subpoena power, designed to spawn greater accountability and transparency with the Police Department.

Earlier this month, the city settled a wrongful death lawsuit with Taylor’s family for $12 million, the highest amount ever paid out by the city in a case of this kind.

Moreover, the city agreed to add social workers on certain types of police calls and require commanders to review and approve search warrants before sending the requests on to a judge. Officials here also pledged to establish a housing credit program to give officers incentive to live in the areas they patrol.

At the same time, protesters continued to focus on the looming grand jury findings — steadfast in their demand that the officers who killed Taylor be prosecuted.

Last week’s announcement, they said, was a deep insult to the memory of Taylor, and they are demanding release of grand jury transcripts and the appointment of a special prosecutor to review the proceedings.

Back at Bain’s restaurant one afternoon last week, Mario Duerson, a local videographer, stopped in for a brief respite. It had become a quiet place for him during months of protests, he said, and today he felt exhausted — both physically, from marching, and emotionally, from processing the reality of the recent ruling.

He’s also come here several nights, both before and after curfew, to charge his phones and video cameras and to take a few moments to breathe and gather his thoughts. He thinks about the history of his town and of this country.

“This is 2020, not 1920, but if you read history, if you look at certain actions — like the brutalization of Black bodies — there are similarities,” he said. “Race in America will always be an issue, always be a topic because of how this America came to be.”

Still, he said, he protests out of hope.

“I don’t want my grandkids to have to put up with this,” he said.

Bain often thinks about all the protesters she has met in recent weeks and how proud she feels watching them advocate for justice.

“We must speak up and in support of Black lives and Black women’s lives,” Bain said.

Bain has two sons, 18 and 24, and like many parents of Black children, she fears for their lives. She sometimes fears for her own life, too.

Outside her restaurant is a silver plaque commemorating the 1961 sit-ins, in which Black people protested against racist bans on them entering, among other establishments, downtown theaters.

“These fights for justice have been going on for a long time,” she said, “but in some ways, little changes.”

On a recent evening, as protesters marched a few blocks from the restaurant, Bain sat at the bar with a local entrepreneur, Angelique Johnson. Both have gone to protests in recent weeks, but on this night they sat together, sipping wine and talking about this moment in their city’s history.

“Breonna’s death is a result of police brutality at the highest level,” Bain said. “Her death has, sadly, brought about conversations in this city that — for once — it seems like people are willing to have.”

Bain nodded along, then interjected: “We have to make sure that Breonna’s life is remembered — and how she has created a moment for change.”

Outside, a man on a megaphone walked past the front door.

“No justice, no peace,” he yelled, the sound echoing through the empty streets.

Bain looked at the unlocked door — it was almost 9 p.m.