Home » Brady Puts Up a Fight, but It’s Mahomes and the Chiefs’ Day 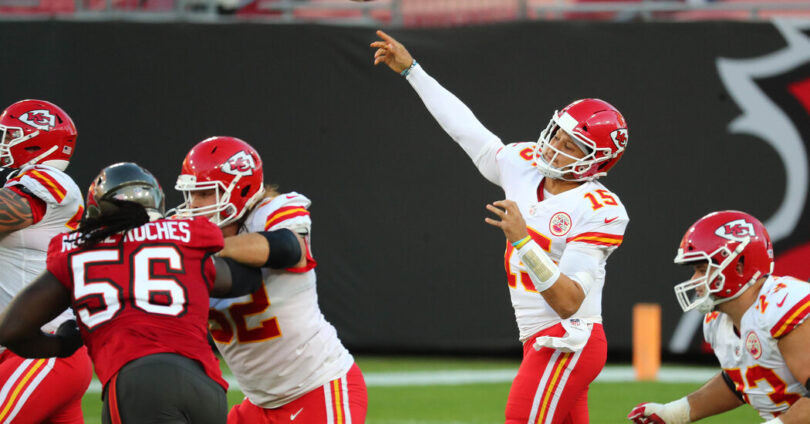 Or as Mahomes said Sunday, “We have so many weapons it’s hard for a team to take them all away.”

As for Tampa Bay (7-5), early this season, their defense was a strength against the run and the pass, but opponents have since found ways to move the ball through the air. In a pass-happy league, it will be tough for the Buccaneers to make an extended playoff run — if they make the playoffs — without more cohesive play by their secondary.

Tampa Bay Coach Bruce Arians, however, wondered if his team would see any quarterback as gifted as Mahomes, unless it is in the Super Bowl.

“Very few guys I’ve ever seen in this league, or any league, can backpedal eight, nine, 10 or 11 yards in the pocket and throw a dime 25 yards down the field,” Arians said of Mahomes. “He has an unbelievable skill set. We had a lot of good rushers on him and he just keeps backpedaling away and slings it sidearm or whatever, and he can read the defense as he does it, which makes him even more explosive. It’s very frustrating.”

Asked if Mahomes might inspire Reid, 62, to extend his career, Arians joked that “Andy is going to be coaching until he’s about 80.”

Tampa Bay fell behind by 17-0 in the first quarter largely because they allowed cornerback Carlton Davis, who was playing for the injured starter Jamel Dean, the Buccaneers’ fastest player, to try to defend Hill in man-to-man coverage with no help from a deep safety. Hill first caught a 75-yard touchdown pass down the right sideline, and on the Chiefs next possession he ran away from Davis for a 44-yard touchdown reception. Hill’s 20-yard touchdown catch midway through the third quarter put Kansas City ahead, 27-10.

“We don’t get a lot of that,” Mahomes said of the single coverage Hill received, “especially with that guy and his ability. And when we get it, we try to take advantage of it.”

Brady regained some of his old form in the final quarter by connecting with tight end Rob Gronkowski, who had six catches for 106 receiving yards. Brady, who completed 27 of 41 passes for 345 yards, then cut the Kansas City lead to 27-17 with a precisely thrown 31-yard touchdown to wide receiver Mike Evans. Evans’s second touchdown of the game, a 7-yarder, made it a 3-point game with 4 minutes 10 seconds remaining. But Mahomes twice scrambled for first downs on the Chiefs’ final drive, and boldly threw on occasion as well as Kansas City closed out its victory.