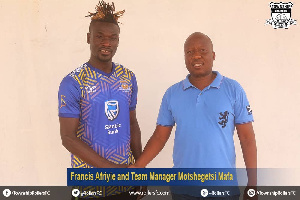 The 24-year-old joins from financially-stricken Kenyan Premier League side Gor Mahia on a two-and-a-half-year contract.

According to reports, the former Bechem United player was owed salaries and was linked with a move to Spain.

”The 24-year-old, who turns 25 on January 18 joins the Blues from current Kenyan Premier League champions Gor Mahia on a two and a half year contract.”

He has experience playing in Europe for Serbian side Vojvodina and in North America for the Mexican side Murcielagos.