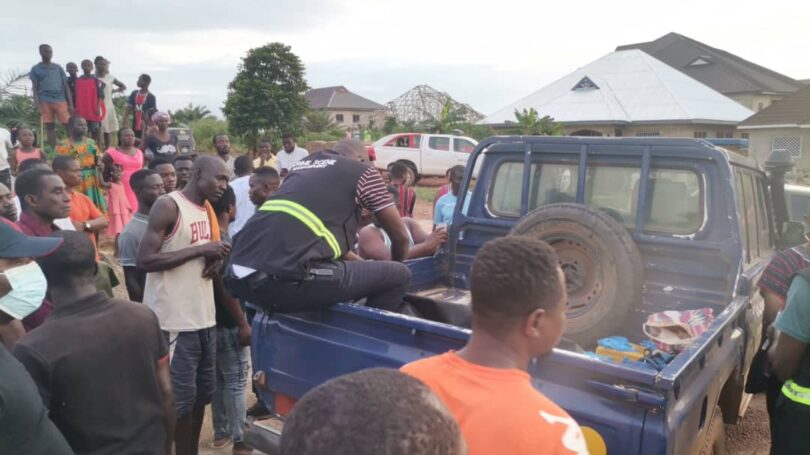 Police in Kuntenase in the Ashanti Region have picked up one Rashid Ibrahim for the alleged cold-blooded murder of Israel Agyei Manu, a headteacher of Rogel Montessori Basic School and owner of a private vehicle used for ride-hailing services.

The 33-year-old who was driving a Toyota Vitz vehicle, with car registration number, GE 3170-21, was beheaded on Sunday afternoon.

Some inhabitants of Feyiase Akoyem in the Bosomtwe District of the Ashanti Region where the incident occurred said they heard a loud cry for help, only to discover a body with the head cut off, with some body parts also missing.

The police in a statement said the suspect “who initially gave an untenable alibi to police, later “confessed to committing the crime.”

Police said the suspect, Rashid Ibrahim, later led officers “to retrieve the machete which he allegedly used to behead the deceased at Feyiase New Site on 4th July 2021.”

The suspect is currently in police custody pending processes to be put before court.

“Police commend community members who volunteered their observation of the movement of neighbours and strangers alike to police, leading to the arrest. Police assure them of the strictest confidentiality and appeals to such informants to desist from blowing their own cover by bragging about such exploits,” police added in the statement.

The Assembly Member for the Feyiase Akoyem area, Samuel Yaw Kwae, who earlier narrated the incident to RC News, said after seeing the headless body, they embarked on a frantic search which led them to the head of the deceased, few meters away from where the headless body was found.

“I got a call from one of my committee members around 2:05 pm today [Sunday, July 4, 2021] indicating to me that, they have received news of a murder in our community, so I quickly called the police, and they confirmed the news to me. So I had to come and lead them to the scene. When we got there, we met a body without the head.”

“They [Police] invited the CID to the scene to take all the needed information for investigations. So after that, I recommended to the police that we do a thorough search for the head of the deceased and indeed they listened to me and the people of the community helped me weed the place, and we found the head as well.”

As of May 2021, a comparative analysis of some crime statistics from the first quarters of 2020 and 2021, showed some improvement in policing except in the area of reported murders.

He said the issue needs to be addressed, noting that, “one loss of life in Ghana is one life too many.”