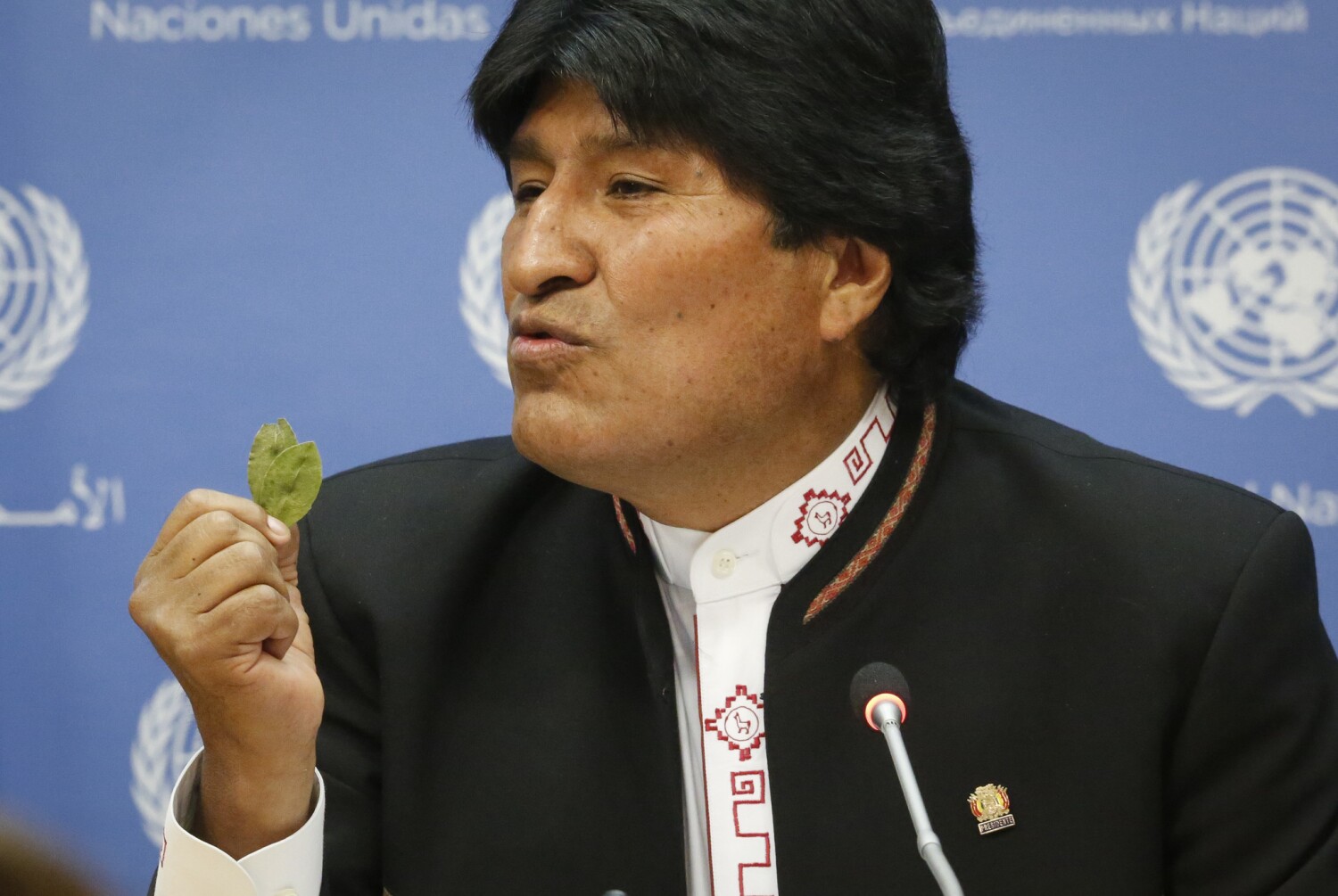 He is not on the ballot, but former President Evo Morales looms large in Bolivia’s much-anticipated national elections Sunday.

The socialist firebrand and longtime U.S. adversary remains in exile in neighboring Argentina after resigning from office under military pressure following a contentious vote a year ago, when he sought a controversial fourth term in office.

But his political party, which features Morales’ former economic minister as its presidential candidate, is leading in polls in the run-up to the new balloting in this landlocked Andean nation of 11 million.

Sunday’s contest has drawn poll watchers from across the globe. Some call the election — which also includes contests for the national legislature — the most significant in the country’s modern history.

“It’s a huge moment for Bolivia, precisely because of what happened in last year’s elections,” said John Walsh, an analyst with the Washington Office on Latin America. “Everyone sees this as having enormous, even existential stakes for the country. … And if people are incited to protests and violence because they think the election is being stolen from them, it could get very ugly, very quickly.”

Authorities are on high alert amid fears that a close or disputed vote could trigger fresh upheaval in the streets.

An economic recession — fallout from the coronavirus pandemic and depressed commodity prices — has prompted many Bolivians to yearn for the return of so-called “Evonomics,” the amalgam of social welfare payouts, public works projects and a generally hands-off approach toward businesses that saw Bolivia’s economy grow steadily during much of Morales’ almost 14 years in office. High prices for commodities, especially natural gas, fueled relative economic prosperity in a nation that has long been among the poorest and most politically volatile in Latin America.

While his critics denounce him as a left-wing autocrat, for many Bolivians, Morales’ tenure stands in stark contrast to the country’s current hard times.

“With the government of Evo we were much better off, there was economic security, not like now,” said Rosa Machaca, 43, a fruit vendor on the streets of the capital. “Now there are families that don’t have enough to eat.”

Sunday’s election is an official rerun of last year’s disputed balloting, which ultimately saw Morales step down even though he had the most votes in his bid for a fourth consecutive term. A court ruling had allowed him to run even though voters in a national referendum had said he should not be able to seek a fourth term.

The Bolivian military high command pushed him to leave office after weeks of street protests about alleged voting fraud, which he denied. Morales called the outcome a U.S.-backed coup, but Washington denied any involvement in his resignation.

A right-wing legislator, Jeanine Añez, succeeded Morales as the country’s interim president, a move that Morales called illegal. Añez famously brandished a Bible as she took the presidential oath, a broadside against Morales’ secular, left-wing leadership. The Trump administration applauded the departure of Morales, an admirer of Fidel Castro and Hugo Chávez who rose from humble origins as the head of the union representing the country’s growers of coca leaf, the raw ingredient in cocaine.

But Añez, a stalwart of the country’s economic elite, could never gain electoral traction beyond her right-leaning base. With the economy having tanked, she dropped out of the race last month.

Now the interim president — accused of illegal repression of the pro-Morales camp — has embraced what is called here the “anyone but MAS” strategy, after the Spanish acronym of Morales’ political bloc, Movement Toward Socialism.

“We have to vote responsibly for the most beneficial candidates, the ones who will defeat Evo Morales,” Añez said this week.

Morales’ determination to run for reelection last year alienated even many admirers alarmed about possible president-for-life aspirations. But Morales maintains a strong base of support, especially among the indigenous, poor and working-class multitudes who constitute the majority of Bolivians.

The pleas from Añez and other Morales opponents have not negated the appeal of the ex-president, who in 2005 became the first indigenous Bolivian elected to the presidency.

The current front-running presidential contender, according to polls, is Luis Arce, 57, an ex-banker who served as Morales’ economic minister.

In his campaign closure this week , Arce took to the streets of El Alto, a working-class and largely indigenous suburb of the capital, a Morales stronghold.

“We have lived through a bloody coup, a nightmare in which the people have suffered pain, mourning and hunger,” Arce told the crowd. “Racism, discrimination and arrogance have returned. … They thought they would kill MAS, but in Alto we say, ‘Here we are! Alive!’ “

Opponents dismiss Arce as a puppet of Morales, who, even in exile, remains the leader of the MAS, the country’s largest unified political force.

While polling in Bolivia can be erratic, a recent poll showed Arce ahead with about one-third of the presidential vote in a field of five candidates. His closest challenger is ex-President Carlos Mesa, 67, of the center-right Citizen Community party, with almost one-quarter of the vote, according to the polling firm Ciesmori.

Bolivian electoral law mandates that a presidential candidate must win a majority, or at least garner 40% of the vote with a 10-point lead over his or her nearest challenger, to be declared a first-round winner.

Mesa is counting on support from the many Bolivians alienated by the havoc of last year’s voting, both on Sunday and in a second prospective round of voting in November, in which MAS opponents would presumably unify.

The pandemic has forced several postponements of the election slated for Sunday.

“I just hope that democracy triumphs in these elections,” said Johnny Antezana, 38, a businessman here. “We have suffered an institutional crisis. And and I don’t think the people can support more uncertainty.”

From his exile in Argentina, where he has been granted political refugee status, Morales has voiced confidence in a resounding triumph for his political protégé, Arce. He has vowed to return to Bolivia “the next day” after his ally’s projected victory, despite arrest warrants against him for sedition and terrorism.

“I am sure, brothers and sisters, that you will not abandon me,” Morales said last month in a message to fellow Bolivians. “We are going to win again.”