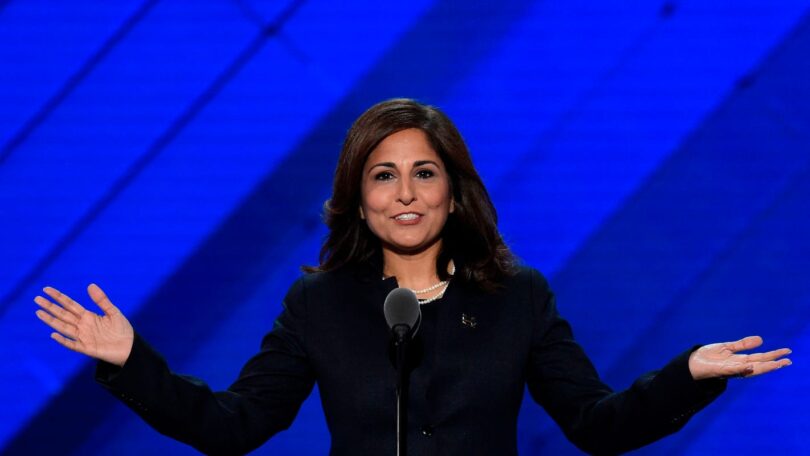 Arizona officials have certified Joe Biden’s narrow victory over President Donald Trump in the state. Biden won Arizona by 0.3% of the nearly 3.4 million ballots cast, a margin of just under 10,500 votes. (Nov. 30)

President-elect Joe Biden has called for bipartisan unity since he announced his candidacy but the objections from both conservatives and progressives to his pick to head the White House Office of Management and Budget was likely not what he had in mind.

Voices from the left and the right protested after Biden announced Monday he would nominate Neera Tanden, who heads the left-leaning Center for American Progress, as his budget chief at the same time he officially unveiled other senior members of his economics team, including Janet Yellen, whom he tapped as his Treasury secretary.

As many conservatives derided her for being too liberal and many liberals dismissed her as too conservative, Tanden seemed to attempt to assuage the latter critics’ concerns by pointing to her reliance on public food and housing programs as a child and vowed that as the director of OMB she would “help ensure those programs are secure.”

Biden’s transition website also played up her humble background, saying she “relied on food stamps and Section 8 housing as a child – a social safety net that offered her single mother the foundation she needed to land a good job and punch her family’s ticket to the middle class.” And it said her career had “focused on pursuing policies designed to support working families, foster broad-based economic growth, and curb rampant inequality.”

After my parents were divorced when I was young, my mother relied on public food and housing programs to get by. Now, I’m being nominated to help ensure those programs are secure, and ensure families like mine can live with dignity. I am beyond honored.

But such assurances appeared unlikely to sway progressives detractors like Brianna Joy Gray, the former press secretary for Sen. Bernie Sanders’ 2020 presidential campaign, who tweeted, “Everything toxic about the corporate Democratic Party is embodied in Neera Tanden.”

Sanders, who would be the ranking Democrat on the Senate Budget Committee that will hold Tanden’s confirmation hearings, and Tanden have had a strained relationship. Tanden worked on Hillary Clinton’s 2016 campaign, including her hard-fought primary campaign against the Vermont independent.

In 2019, Sanders criticized the “destructive role” of the Center for American Progress under Tanden. “Neera Tanden repeatedly calls for unity while simultaneously maligning my staff and supporters and belittling progressive ideas,” Sanders wrote in a letter.

Gray and others pointed to comments Tanden made during her tenure as a health care reform adviser to former President Barack Obama where she expressed a willingness to include cuts to Social Security, Medicare and Medicaid in a budget deal with Republicans. Others decried her opposition to “Medicare for All.”

Not all progressive figures objected to Tanden’s nomination. Former Labor Secretary Robert Reich said Tanden, along with Biden’s other picks for his economic team, is “committed to full employment, boosting wages, reducing inequality.”

Sen. Sherrod Brown, D-Ohio, tweeted, “Neera Tanden is smart, experienced, and qualified for the position of OMB Director.” And he objected to Republican calls to block her nomination, saying, “The American people decisively voted for change – Mitch McConnell shouldn’t block us from having a functioning government that gets to work for the people we serve.”

“Such a great choice to lead OMB,” tweeted Rep. Barbara Lee, D-Calif. “@NeeraTanden will bring the experience and humanity urgently needed in this position. Congratulations!”

Such a great choice to lead OMB. @NeeraTanden will bring the experience and humanity urgently needed in this position. Congratulations! https://t.co/a5q0RaZ9vR

Many conservatives, who remember her as one of the architects of the Affordable Care Act, said they had no doubts about Tanden’s liberal bona fides.

“Neera Tanden is a big-government, big-spending radical liberal who’s a terrible choice for OMB Director,” tweeted Sen. Rick Scott, R-Fla. “It’s just more proof that @JoeBiden and the Democrats will continue to move further and further to the Left.”

Sen. Kevin Cramer, R-N.D., told The New York Times “she’s not just a liberal ideologue, she’s a partisan activist who’s gone after senators of the majority party. She seems to have chosen a path that doesn’t lead to a senate confirmed office.”

Sen. John Cornyn told reporters Tanden was Biden’s “worst nominee so far” because of caustic tweets she had posted in the recent past.

“I think, in light of her combative and insulting comments about many members of the Senate, mainly on our side of the aisle, that it creates certainly a problematic path,” he said. Earlier Monday, Drew Brandewie, Cornyn’s communication director said Tanden “stands zero chance of being confirmed” because of an “endless stream of disparaging comments about the Republican Senators whose vote she’ll need.”

The former chief of staff to Senate Majority Leader Mitch McConnell tweeted that Tanden’s nomination was a “sacrifice to the confirmation gods.”

Sen. Lindsey Graham, R-S.C. – who is expected to chair the Budget Committee – told reporters Tanden’s confirmation could be an “uphill battle.”

Tanden has been highly critical of a number of Republican senators during the Trump administration – referring to them as the president’s “enablers” – including McConnell whom she accused of “weakness and recklessness on Russia.”

A number of tweets appeared to have been deleted from Tanden’s account Monday night, but according to The Wall Street Journal, she also once tweeted, “I’m glad McConnell is fiddling, while the markets burn.”

A Google search for posts on McConnell under her account revealed at least four tweets that were no longer available.

During the contentious confirmation hearings for Brett Kavanaugh, she accused Sen. Susan Collins, R-Maine, of making a “pathetically bad faith argument as cover for President Trump’s vicious attacks on survivors of sexual assault.”

“She is the worst,” she said of Collins in another tweet at the time.

Collins told reporters Monday she didn’t know much about Tanden, “but I’ve heard that she’s a very prolific user of Twitter.”

She is the worst https://t.co/Nwd1yhi8NG

And the criticism of her Twitter activity extended to the left as well.

Gray said Tanden was “a woman who is openly disdainful of Bernie Sanders and his coalition, but who is friendly with extreme bigots online.”

A number of Tanden’s supporters dismissed the criticism, arguing many of those condemning her tweets had tolerated far worse from Trump.