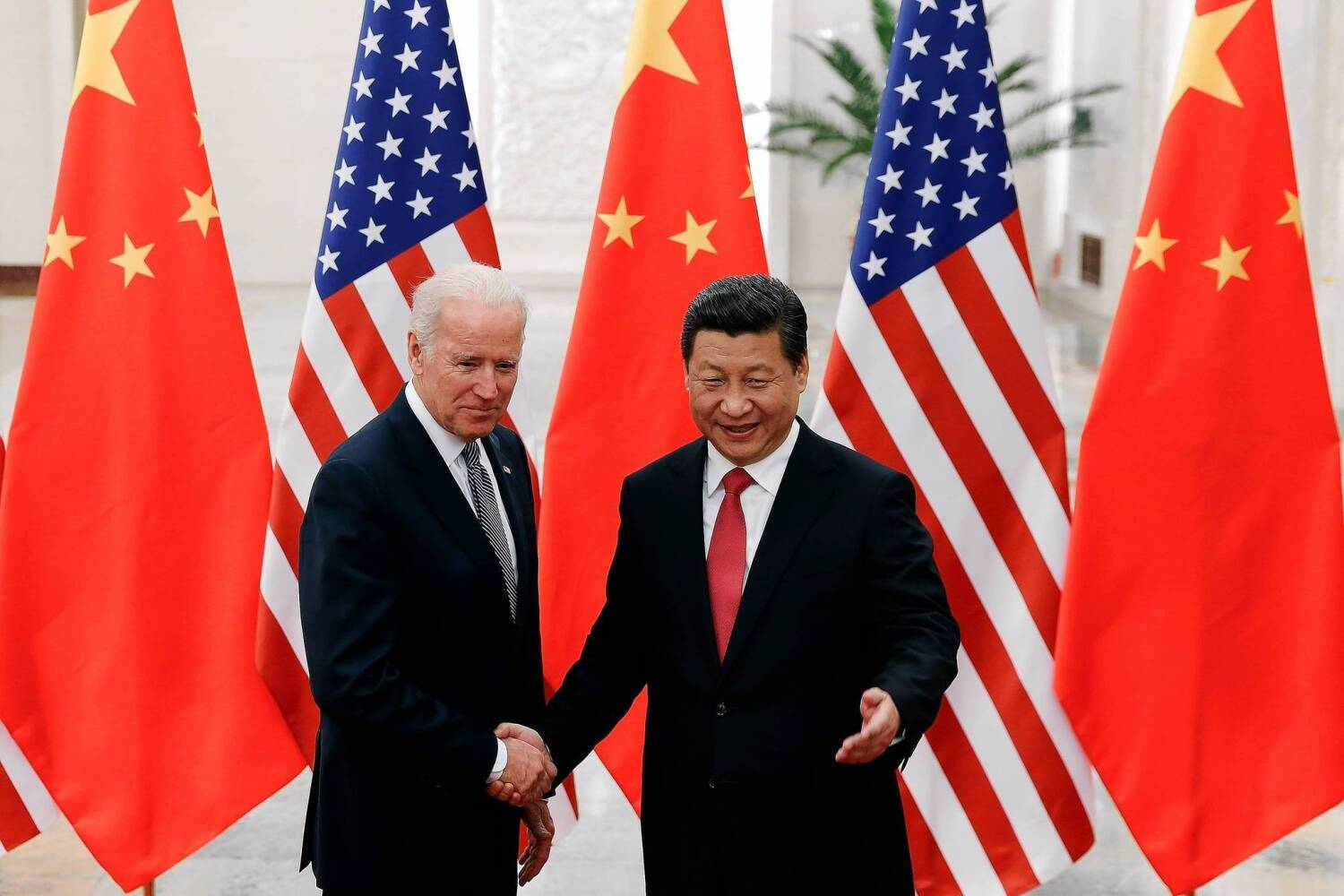 As Joe Biden and Kamala Harris launch their drive for the White House, the essence of their campaign is to be the un-Trump ticket — different from the president in every way possible.

But when it comes to what may be the nation’s biggest foreign policy challenge — China — a Biden administration may well end up closer to Trump’s hard-line approach than to the less confrontational strategy of President Obama.

Outwardly, Biden is unlikely to pursue the kind of hyper-enthusiastic, effusive bromance that Trump initially sought with China’s President Xi Jinping, nor engage in the angry tweets and bellicose threats at China that followed. Biden will be looking to work with other nations, rather than picking fights with allies or taking unilateral actions like those that have marked Trump’s presidency.

“Their stylistic differences are so great. It will certainly seem different,” said James Mann, a China expert and fellow at Johns Hopkins University School of Advanced International Studies, referring to Biden and Trump.

Nonetheless, he noted, “It will still be conflict-ridden, maybe at times confrontational, but certainly ridden with conflicts in ways that either weren’t there or were downplayed a decade ago.”

A future President Biden would likely remain firm on security issues involving China, although not cast in the same ideological terms that the Trump administration has, said Evan Medeiros, China relations professor at Georgetown University and a National Security Council official in the Obama administration.

On trade and commerce, Biden’s freedom of movement may be restricted by the more progressive wing of the Democratic Party, which is highly suspicious of free trade and closer to Trump on protectionism than many moderates in the party. Those pressures could weigh on Biden’s efforts, for example, to revive the Obama-era Trans-Pacific Partnership trade agreement that would have united around a dozen countries — excluding China. Trump jettisoned the pact in his first days on the job.

The agreement was the centerpiece of Obama’s so-called pivot to Asia, a geopolitical attempt to strengthen U.S. leadership in the western Pacific and push Beijing to play by American rules. But the pact never gained enough support among Democratic lawmakers, and Biden has said he would not rejoin the accord in its current form, but seek to renegotiate it.

Biden has taken aim at Trump’s trade war with China, criticizing the barrage of tariffs and counter-tariffs by Beijing for hurting U.S. farmers and manufacturers without changing Chinese behavior on fundamental industrial policies such as government subsidies for state-owned firms.

At the same time, with tariffs already in place thanks to Trump, Biden might not rush to undo them, leveraging them to pressure Beijing.

“I think a President Biden would be less overtly antagonistic, but the substance might not change very much,” said Dean Cheng, a senior research fellow specializing in China at the conservative Heritage Foundation, which has advised Trump on foreign policy.

Going back to President Nixon’s official visit to China in 1972, American leaders from both parties have sought to pull China into the family of nations and closer to democratic values by encouraging trade and investment, and sometimes overlooking Beijing’s darker side when it came to human rights.

Today most analysts see that approach as naive. China has turned into a global economic superpower and a military rival to American power in Asia. And rather than embrace Western reforms, Xi has been more aggressive in the global economy and more repressive at home. Across the board, he has asserted the supremacy of rigid Communist Party doctrine, cracking down hard on dissent, on China’s Muslim minority, and on Hong Kong.

Democrats and Republicans alike have become increasingly critical of Chinese behavior — from its broad-scale theft of U.S. companies’ intellectual property to aggressive military actions in the South China Sea.

In this new climate, it would be difficult if not impossible for Biden to return to the China strategy he embraced while serving as Obama’s vice president.

“The China that will face Joe Biden in January of 2021 is vastly more powerful and more formidable as an adversary than the China that he and Obama dealt with up until the end of 2016,” said Daniel Russel, a top Asian affairs official in the Obama administration and now a vice president at the Asia Society Policy Institute.

Mann said one thing a Biden presidency will inherit is a major hardening of views of China within U.S. intelligence agencies, the FBI, the Commerce Department and the Pentagon, which had once favored a policy of engagement.

“It’s a mistake to think that when Trump is gone, all of the people arguing for a tougher China policy will be gone,” Mann said. “The agencies and the interests they represent will still be there.”

In interviews, Biden’s current and former foreign policy advisors said they have been warily watching Trump and his administration ramp up anti-China rhetoric and actions in recent weeks.

Trump has threatened to ban Chinese-owned social media platforms TikTok and WeChat, imposed restrictions on Chinese research students in the U.S., repeatedly referred to COVID-19 as the “China virus,” and closed the Chinese consulate in Houston.

As for where a President Biden might try to take U.S.-China relations in a more positive direction, some suggest Biden might return to more conventional diplomacy, opening the door to working with China on issues like climate change and public health.

As a former longtime member of the Senate Foreign Relations Committee, Biden has repeatedly stressed his desire to restore America’s alliances in Europe and Asia, and its standing in the world as a champion of democracy and a rules-based international order. He has argued that is the best path to taking on the threat of China.

“The most effective way to meet that challenge is to build a united front of U.S. allies and partners to confront China’s abusive behaviors and human rights violations, even as we seek to cooperate with Beijing on issues where our interests converge, such as climate change, nonproliferation, and global health security,” he wrote in Foreign Affairs earlier this spring.

“On its own, the United States represents about a quarter of global GDP. When we join together with fellow democracies, our strength more than doubles. China can’t afford to ignore more than half the global economy.”

In this way, Biden may attempt to strike a middle-of-the-road approach that remains tough on some China issues while opening channels of communication that Trump has effectively shut down, apart from trade.

“I think you will have a change in tone, an appreciation that you have to talk to China, as Nixon and Kissinger did,” said Medeiros, the Georgetown expert.

“But,” he added, “dialogue is not concession, and negotiation is not accommodation.”

It remains to be seen whether diplomacy and international pressure will work on an emboldened Chinese leadership. Beijing dismissed an international court ruling against its claims on the South China Sea, and Xi proceeded to impose a sweeping security law over Hong Kong despite warnings from the U.S. and other countries.

Not surprisingly, American attitudes have turned more negative toward China, and that too could constrain Biden’s hand.

“Any president in this country responds to public opinion,” said Rep. Brad Sherman (D-Northridge), who nonetheless expects Biden to dial back the confrontation on the South China Sea.

Biden would likely hope to engage China on fighting climate change, given that it’s inconceivable that an effective agreement could be had while leaving out the world’s biggest emitter of greenhouse gases.

For Obama, climate change was such a top global priority that he downplayed other conflicts with China in return for Beijing’s help on the landmark Paris Climate Treaty, which every country in the world was part of until Trump withdrew the U.S. in 2017.

Beijing is a signatory, but has continued to violate many caps on production of pollution and emission of chlorofluorocarbons that destroy the earth’s ozone layer.

Biden, too, will need to pick which policies to prioritize.

Biden aides suggest they will focus on a handful of targets like trade, cyber-espionage and democracy, rather than what they describe as the scatter-shot approach of the Trump administration over the last four years.

“China sees itself in a strong position … a China in ascendance,” said Bonnie Glaser, director of the China Power Project at the nonpartisan Center for Strategic and International Studies, a think tank in Washington. “In my view, we will have to revitalize America, lest China take advantage of what it sees as an American weakness.”