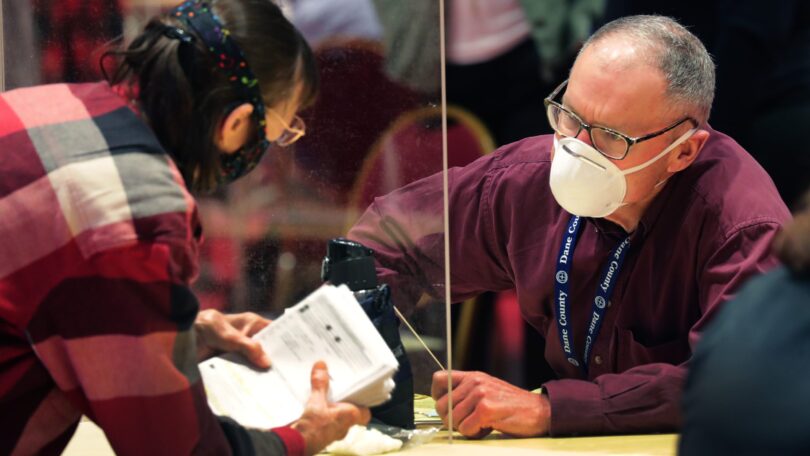 The completion of the recount prompted the Democratic leader of the state Elections Commission to say she would certify Biden’s victory on Monday, clearing the way for Trump to file a lawsuit. But a Republican on the commission said it was premature for the state to sign off on the results and he hoped Chairwoman Ann Jacobs would not act until the commission meets Tuesday.

Dane County wrapped up its retallying of the vote came two days after Milwaukee County finished its recount.

Biden netted 132 votes in Milwaukee County and Trump netted 45 votes in Dane County. Taken together, that increased Biden’s statewide margin to 20,695 votes out of about 3 million cast.

Trump’s campaign paid $3 million to cover the cost of the recounts in Wisconsin’s two most Democratic counties so he could pursue a long-shot lawsuit to claim the state’s 10 electoral votes.

Trump on Saturday tweeted that he would file a lawsuit in Wisconsin by Tuesday, when the state Elections Commission is set to certify the results.

“The Wisconsin recount is not about finding mistakes in the count, it is about finding people who have voted illegally, and that case will be brought after the recount is over, on Monday or Tuesday,” Trump wrote.

The recount has not turned up evidence of fraud, prompting Twitter to label his tweet as disputed. Trump’s campaign has alleged long-standing voting practices in Wisconsin are illegal and sought to throw out about 238,000 ballots in Dane and Milwaukee counties.

The campaign claims all early in-person votes in those counties are illegitimate, including ones cast by GOP state Sen. Alberta Darling,  GOP state Rep. Jessie Rodriguez and Trump campaign attorney Jim Troupis. Democrats, election officials and election attorneys have called the claim preposterous, noting the state has been conducting early in-person voting the same way for a decade without any challenges.

Trump has faced setback after setback in court in other states and he faces an uphill battle in Wisconsin. Even if he managed to change the outcome in Wisconsin, Biden would still be able to claim the presidency because of his victories in other states.

Jacobs said Sunday she planned to certify Biden’s victory on Monday to help resolve any legal challenges as quickly as possible. She said it was better to move the process along on Monday instead of waiting until the commission meets Tuesday.

“The reason for that is the Trump campaign cannot appeal until it’s certified,” she said.

State law allows gives the commission chairperson the power to certify results, and that’s what has been done in past elections. But Republicans have argued the rest of the commission should play a role this year because of disputes over how voting was conducted.

Certifying the results is a simple, administrative matter, Jacobs said.

“The role of the Elections Commission is essentially to verify the numbers, and that’s the whole purpose of the canvass,” she said.

Commissioner Bob Spindell, a Republican, called Jacob’s move “completely inappropriate.” He said the commission should discuss the matter at Tuesday’s meeting, adding he didn’t think the state should certify anyone so the courts can consider what to do.

“Obviously, she’s trying to pull a fast one for some reason,” he said of Jacobs.

In Milwaukee County, Biden netted 132 more votes over the initial results. Much of the increase occurred because tabulators discovered 386 votes had not been counted on Election Day.

In Dane County, Biden had 91 votes taken away and Trump had 46 votes taken away, netting Trump an uptick of 45 votes in that county. Most of the votes were taken away because absentee ballot envelopes were found to have lacked voter signatures, witness signatures or witness addresses, said Dane County Clerk Scott McDonell.

The county’s Board of Canvassers unanimously signed off on the recounted results. The board consists of one Republican and two Democrats, including McDonell.

“For me what this recount showed was that there was absolutely no evidence of voter fraud in this election even after looking at over 300,000 ballots, over 254,000 envelopes,” McDonell said. “Really this incredible level of transparency should provide reassurance to the public that the election was run properly and accurately and there was no fraud.”

McDonell said he was bothered that Trump tried to throw out votes in the state’s Democratic strongholds while letting stand ones that were cast the same way in Republican areas.

“I think we need to think about whether that is equal protection under the Constitution,” he said. “Those voters aren’t being equally protected if that were true — that the same action in one county as another, one vote gets tossed, the other doesn’t. I think that’s disturbing.”

Like the president, Trump attorney Jenna Ellis suggested a lawsuit is coming after the recounts were finished.

“As we have said from the very beginning, we want every legal vote, and only legal votes to be counted, and we will continue to uphold our promise to the American people to fight for a free and fair election,” she said in a statement.

Highlighting the difficulties for the Trump team, Assembly Majority Leader Jim Steineke signaled on Twitter he would not be on board with changing Wisconsin’s outcome.

In response to a headline about whether the Legislature could change Wisconsin’s slate of electors, the Republican from Kaukauna tweeted a clip of actor Dana Carvey playing President George H.W. Bush saying, “Not gonna do it.”

Already there are two lawsuits over the election results pending before the Wisconsin Supreme Court. Both are asking the high court to throw out results and allow the Republican-controlled Legislature to decide how to cast the state’s votes in the Electoral College.

The justices have not said whether they would accept the cases. Conservatives hold a 4-3 majority on the court.

In one lawsuit, the Wisconsin Voters Alliance contended many of the state’s votes were illegal because clerks filled in the addresses for witnesses on some absentee ballot envelopes and some absentee voters may have claimed to be indefinitely confined even though they weren’t. Indefinitely confined voters, such as the elderly and disabled, can get absentee ballots without having to provide a photo ID to election officials.

The group also maintains it was illegal for Milwaukee, Madison and other Wisconsin cities to accept $6.3 million from the Center for Tech and Civic Life to help run their elections. The nonprofit center is funded by $350 million from Facebook founder Mark Zuckerberg and his wife, Priscilla Chan. The group earlier made that claim in a federal lawsuit, but U.S. District Judge William Griesbach ruled against them.

On Friday, Dean Mueller of Chippewa Falls filed a lawsuit asking the Wisconsin Supreme Court to reject the state’s votes because many communities set up absentee ballot drop boxes that he contends were not allowed under state law.