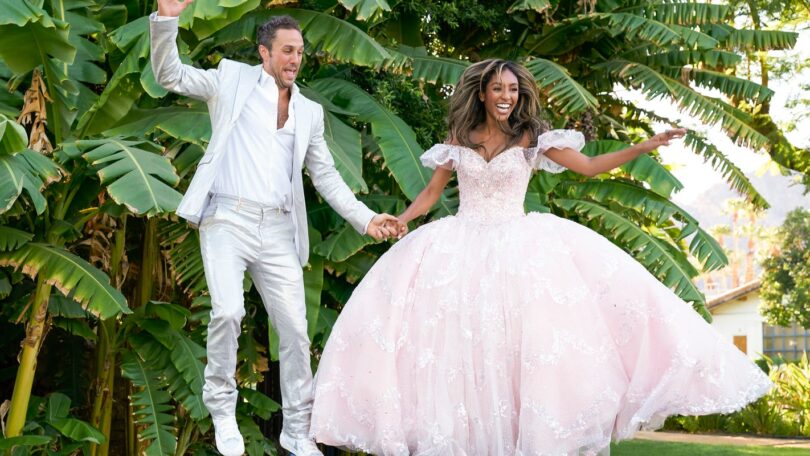 Before Matt James was tapped for “The Bachelor,” Rachel Linsday was the only black person to hold a title role. She was “The Bachelorette” in 2017.

With only 12 men left to compete for Tayshia’s heart on “The Bachelorette,” the stakes have never been higher – meaning someone was bound to get hurt. Who was the unlucky fellow this week? And what happens when two men face off for a rose?

Before we get started, a quick heads-up: Previous “Bachelorette” JoJo Fletcher appears this week to briefly take over Chris Harrison’s hosting duties while he takes his son to college. We’ve always been a big fan of hers (even if she did pick Jordan, but hey, they’re still together).

Tayshia picks Zac for the week’s first one-on-one date. It’s a wedding photoshoot! The reality of the situation clearly weighs on Tayshia, though Zac lightens the load. We couldn’t help smile along with Zac seeing Tayshia in one of the wedding dresses she tries on.

“The way he looks at me, I think it says so much,” Tayshia says. It didn’t scare her at all to think of Zac waiting for her at the altar at the end of this.

Tayshia and Zac C. dress up to capture some lovely wedding photos. He reveals himself to be a real survivor, surprising the Bachelorette and compelling her to see him in a different light. (Photo: Craig Sjodin, ABC)

Tayshia – and Bachelor Nation – learn a lot about Zac this episode that explains some of his guarded behavior around her. After graduating college, he started feeling unwell and found out he had a brain tumor. He had surgery, which led to him taking pain medication and eventually drinking, drugs and partying. He also got married, and his wife left him after he was arrested and got a DUI.

Zac’s dad talked some sense into him after he tried to cash one of his dad’s checks. He went to rehab for four and a half months and is now on the board of that rehab. Good job for getting your life together, Zac.

Tayshia appreciates him opening up to her and she gives him the rose (obviously). The pair (adorably!) ride a Ferris wheel together. Tayshia says he embodies the qualities she is looking for. “My heart is racing, I have shortness of breath; I don’t really know what’s going on,” she says. Maybe shortness of breath is not something to say so cavalierly right now, Tayshia!

One thing she isn’t cavalier about: She’s falling for Zac.

‘Express yourself’ … by stripping?

The group date this week includes: Spencer, Ivan, Ed, Blake, Brendan, Riley, Demar, Bennett, Ben and Noah. The date card reads: “Express yourself.” This means Eazy gets the other one-on-one.

The men on the group date walk into a room with a nude couple posing, leaving the guys thinking they’ll be stripping down yet again. But the day is all about art – including drawing the naked couple, molding clay while blindfolded (and during which Bennett kisses Tayshia, and makes the awful pun “50 shades of clay”) and creating vulnerable self-portraits.

Bennett and Noah clash on the group date in front of Tayshia – though more on that will come later.

The men all go above and beyond with creativity in their self-portraits – but Ben stands out. He leaves the room and dons a bathrobe, then tells her he figuratively and literally wanted to strip down for her. He takes off the bathrobe (!) and says, “This is me showing up for you.”

Tayshia cries and is overwhelmed at how open they were with her.

This openness continues later: Riley lived with his dad when he was young after his parents divorced and later reconnected with his mother. Ben reveals he had an eating disorder – making his nakedness much more intimate than we realized.

“The life I’ve lived is different than what you might assume,” he says, and he was right. He had bulimia for years; he stopped eating, worked out a lot and lost 70 pounds. The only person who knows about it is his sister. He tears up as he tells Tayshia, and makes us cry, too.

Ben, our hero, receives the rose.

Tayshia calls out Noah and Bennett. “There’s something going on between you two and I’m going to get to the bottom of it one way or another.”

Sparks continue to fly between them – and not the good kind. “I’m not on ‘The Babysitter,’ I’m on ‘The Bachelorette,’ ” Bennett says. This is stupid and dramatic, but chaotic enough to be interesting.

Tayshia lets him down Eazy

Eazy and Tayshia go ghost-hunting on their date around the resort. We see them laugh and scream in black-and-white, filmed like a found-footage type of horror movie. This should have aired closer to Halloween.

Eazy tells Tayshia during dinner that he feels like he’s falling in love with her.

She tells him that he’s a solid and good man  … but she can’t give him a rose. She’s not where he is and she doesn’t know if she can get there. Cue “Dancing on My Own.” We’ve been there, Eazy.

What happens next is less of a shock and more of an inevitability.

JoJo tells the remaining men that there will still be a cocktail party, just not right away … and that Tayshia is concerned about Noah and Bennett. She wants to see both of them before the cocktail party; one will stay and one will go home.

“I crush life under pressure,” Bennett says. This suggests he likely doesn’t.

He brings a gift for Noah while they await Tayshia, which seems like it might be a mature peace offering. But it’s not.

Bennett gives him a red bandana (one of their first conversations was talking about Noah’s upbringing in Oklahoma and Bennett’s former cowboy days; it’s red because he hopes there’s no bad blood going forward); socks with mustaches on them (since the only place you should wear mustaches is your feet, unlike where Noah wore his when he joined the show); and a book on emotional intelligence. Bennett tells Noah that he thinks Noah is deficient in three out of four emotional intelligence components. He comes off like a condescending jerk – though it’s hard to tell if his brain is so warped that he thinks he’s being nice.

Naturally, Noah pushes back on Bennett’s brashness. These two are 11 years apart in age (Noah is 25, Bennett is 36) but both have acted like children.

Tayshia arrives and says she’s over their petty drama. They begin to argue and Tayshia says it sounds like teenage boy drama – then she notices the box and asks what’s in it.

We’ll have to wait, though: That dreaded “to be continued …”

I was right, kind of: ‘The Bachelorette’ recap: Ed, Chasen clash – but Noah (and his mustache) may be the season’s true villain

This season has been wild: ‘The Bachelorette’ recap: Tayshia’s takeover comes with a few twists – including more men