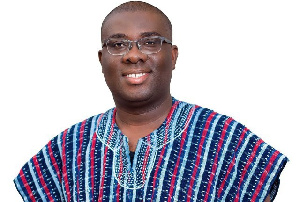 A former Deputy National Youth Organiser of the New Patriotic Party(NPP), Salam Mustapha, has reacted to claims by National Democratic Congress (NDC) National Organiser, Joshua Akamba that Sammi Awuku, current NPP National Organiser is not his ( Akamba) match in terms of organisation and mobilisation, claiming that being a national organiser of a political party is not a drinking competition.

“The difference between the two of you is that one is a Supremo and the other an incompetent douche…being a national organiser is a serious job and not a drinking competition,” Mr Mustapha jabbed in a reaction on social media.

Mr Akamba had in a media interview stated that Sammi Awuku was his inferior when it came to serving as an organiser of a political party.

“I always laugh anytime I hear people compare me and Awuku. He is my son and not my match. Sammi Awuku cannot match me anywhere in terms of organisation and mobilisation,” Joshua Akamba had boldly stated in the interview.

But Mr Mustapha who worked as Deputy to Awuku said that Akamba’s “greatest honour in organization and mobilisation is” that he is being “compared with the icon Sammi Awuku.”

“Point to us one single contribution you have made to your party which is wallowing in opposition presently. Since you took office as a national organiser of your party, which significant feat have you achieved for your party?” Mr Mustapha quizzed.

For him, Mr Akamba had failed as an organiser whereas Sammi Awuku has excelled in his role.

“As a national organiser, your job is to supervise your organs to ensure that their core mandate of mobilisation is done. Your job is to see to the organization of the party structures and events. Your organs are dead horses. Your youth wing is in comatose, your women’s wing is in disarray and Zongo caucus in ruins. That’s how bad you have been as a national organiser,” he alleged.

He, however, praised Mr Awuku for showing exceptional skill in organising and mobilising the membership of the NPP.

“Under Sammi Awuku, our national youth organiser is at his top best. Organising programs back to back. Our organs have all held major events keeping the party structures busy and active,” he wrote.