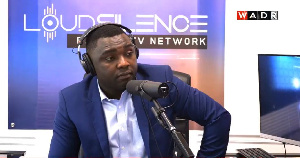 Kevin Ekow Badioo Taylor, Host of ‘With All Due Respect’ on Loud Silence Radio, has said the Commercial Court Judge, Justice Eric Kyei Baffour, who issued a bench warrant for his arrest is not a god.

“Being a judge does not mean you’re a god. It’s a fact and if you go wrong, we need to check you because you’re working with people and the little mistake you make, people can end up in jail for years and we don’t want that,” he said.

His comment follows the publication in the electronic and online media that the Commercial Court Judge has issued a warrant for his arrest over comments he, Kevin Taylor, made about the judge.

According to the Ghanaian who is domiciled in the United States of America the Commercial Court Judge is a problem to the Chief Justice (CJ) and as a judge, he has the right to write all the English and summon all the cases against him, Kevin Taylor, “but the fact still stays that Justice Kyei Baffour is bending the rules”.

He said the judge is on record for making the cocaine turn kokonte case become an unattractive case in Ghana.

“Justice Kyei Baffour, today you’re sending a warrant out to the Inspector General of Police (IGP) whatever to come [and] pick me, so where were you [Justice Eric Kyei Baffour] when an imbecile like Kennedy Agyapong was going around insulting all judges in Ghana? Did you go after Kennedy Agyapong? You didn’t because he’s one of you. Today I look in your face and I tell you the truth and you want to explode,” Kevin Taylor said on his show Thursday evening.

“Kennedy [1962] Agyapong insulted the Chief Justice all the way to the last messenger in the Judicial Service, you did not come out to issue a warrant for him because Kennedy is better than me or is better than the ordinary Ghanaian on the street,” he said.

According to Taylor, most of Justice Kyei Baffour’s colleagues are highly disappointed in him because he has not lived up to expectations.

“You don’t even deserve to be where you are today and so many judges have issues with you,” he added.

“The whole CJ was part of the panel and they [Justices of the Supreme Court] were telling you [Kyei Baffour] that your conduct was questionable,” Kevin Taylor explained.

“Bench warrant, fine you’ve done your part but it won’t stop me from telling you that we’re still watching you in this NCA case and we’re going to make sure you do the right thing,” he warned.

“When Kennedy Agyapong was roaming with his broken jaw insulting every judge did you send him a bench warrant? You Justice Kyei Baffour, technically you’ve turned into a political judge. People should go back and look at this judge, watch all the cases he has been involved in…we’re not stupid!” he stressed.

The Commercial Court Judge, Justice Eric Kyei Baffour on Thursday, January 16, issued a bench warrant directing the IGP, National Security and BNI to arrest US-based Ghanaian, Kevin Ekow Baidoo Taylor for a comment the latter made about the conduct of the judge on his show ‘With All Due Respect’.

The judge in his statement said in Court that the bench warrant will hold until Kevin Taylor is arrested and presented to his court or until he, the judge, no longer exist on the planet earth.