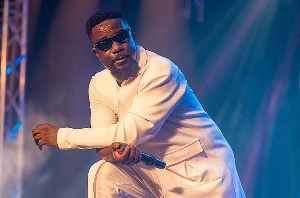 Barely five months after he put the spotlight on Ghana at the 2019 BET Hip Hop Awards, rapper Sarkodie says being a father has really slowed him down.

“It’s a great thing to be a father, it’s actually what I imagined and more but it has it’s downside, you don’t notice the downside but with time you get to realize that you need to do what you were doing and not put a hold to it because someone new came into your life and that’s what has happened to me. It has slowed me down! I thought nothing else mattered.” He revealed.

“ I’m sorry, this is new, to SackNation, I use to update you about my “moves” but when Titi came in I didn’t really care about you guys”. He apologized to his fans.

“Till now, I’ve not really snapped out of it hundred percent (100%) but I just realized I need to work” He noted.

Reacting to comments from some Ghanaians that he is a stingy person on the show, Sarkodie indicated that;

” Like the stingy thing, it’s a social media thing so everyone hops on it then it starts to trend. Personally, for me I don’t care. So, what they are pushing you to do is to prove yourself that you are not stingy which I will never do. So, you’ll always keep that thing in your head till you die and I don’t care”.

Touching on talks of he being arrogant, Sarkodie noted that he has realized that he has been dealing with the wrong people for a long time because whenever he travels to overseas people hardly complain about his character talk less of he been an arrogant person.