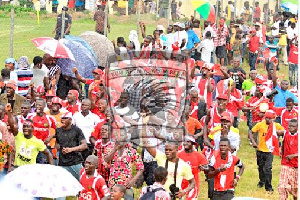 Supporters of West Africa Football Academy (WAFA) has cautioned fans of Asante Kotoko to behave when they visit Sogakope in midweek to honour a Match Week 8 fixture of the 2019/2020 Ghana Premier League season.

The Porcupine Warriors are currently serving a 3-match bad to play their home matches behind closed doors following a shooting incident that happened at the Baba Yara Sports Stadium earlier in the season when they played Berekum Chelsea.

Ahead of the upcoming encounter, WAFA supporters have through a statement charged fans of Kotoko to be of their best behavior when they visit the Sogakope Red Bull Arena.

“Despite the FA’s attempt to stop hooliganism in the league, it is an undoubted fact that fans of Asante Kotoko do not support the FA’s effort”, the statement said.

It continued, “Taking in account their recent actions in the ongoing premier league, we deemed it necessary to caution them ahead of their visit to the land of peace (Red Bull Arena, Sogakope) on February 5, 2020.

“Don’t come here with that assertiveness, considering the fact that Accra Hearts of Oak took a point here their recent visit visit”.

It further called on all fans to troop to the stadium to watch WAFA take on Kotoko on Wednesday, February 5, 2020.

“We urge all football-loving fans most especially, fans of Asante Kotoko to come in peace and enjoy the game of soccer and victory of the lads”.