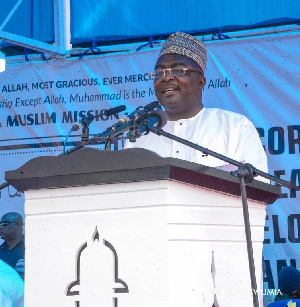 The 2019 National Ahmadiyya Conference at Winneba over the weekend became a platform for the fight against corruption by the governing NPP and the opposition NDC.

Both Vice President Dr Mahamudu Bawumia and former President John Mahama addressed the Conference over the weekend on the theme: “Corruption – a threat to national development, peace and security.”

Dr. Bawumia, who lauded the Ahmadiyya Mission for choosing a theme as crucial as corruption, said the fight against corruption is an on-going one which needed the effort of everyone.

The Vice President said, when the government of President Akufo-Addo assumed office in 2017, it took a critical look at the issue of corruption in the country and realized that the issue is often discussed in macro perception, or in a generalized view, instead of looking at its foundations.

“Corruption has a micro foundation and if you don’t deal with the micro-foundations, then you will not be effective in dealing with it at the macro level,” said Dr. Bawumia.

The Vice President added that from the government’s critical analysis of the situation, it found out that some of the most common forms of corruption were: paying bribes to ‘goro boys’ for passports and driver’s license, bribes to custom officers at the ports, inflated contracts due to sole sourcing as procurement method of choice, as well as corruption in the judiciary, which leads to missing of dockets and distribution of cases to preferred judges.

Having outlined what he called the micro-foundations of corruption, Dr. Bawumia then told the audience what the government of Nana Akufo-Addo has been doing to fight it since 2017.

“Government, since 2017, has been engaged in putting together an architecture that will help in the fight against corruption. This architecture is built on three pillars,” said the Vice President.

“First is the legal framework. The laws must not only be there, but they have to be enforced. Second is the strengthening of institutions that fight corruption; if you don’t resource the institutions, how do you expect them to fight corruption? Third is to deal with a system that prevents corruption. If you don’t have a transparent system, then you allow corruption to get under the radar and survive.”

Dr Bawumia also cited the increment in budgetary allocations for state institutions that fight corruption as a demonstration of the commitment to fight corruption by the Nana Akufo-Addo government.

“Government has increased allocations to all accountability institution including Parliament, the Judiciary, CHRAJ, EOCO, Office of the Attorney General and Ministry of Justice, Office of the Special Prosecutor and the Ghana Police.”

Addressing the issue of putting in place a system to prevent corruption from happening, Dr Bawumia added that the government’s digitization agenda is disrupting corruption in the public sector.

“After putting in place the laws and strengthening accountability institutions, there has to also be in place a system that prevents corruption so that it doesn’t happen.”

“If you look at what used to happen at the DVLA, to get a driver’s license, you had to go and deal with ‘Goro boys’ and pay a bribe. Today, through digitization, we have introduced the digital driver’s license and vehicle registration at the DVLA so the online application and the automation, have essentially eliminated the ‘Goro boys’ in the DVLA.”

The Vice President also noted that through digitization, bribery and corruption in other public institutions such as the passport office, NHIS, as well as corruption and cumbersome processes, which used to exist at the ports, have been eliminated.

When former President Mahama took his turn to address the audience present, he chose to completely ignore how he battled corruption during his time as President and rather focused on accusing the government of Nana Akufo-Addo of weakening state institutions that fight corruption – an allegation which Dr Bawumia had shot down by proving with figures that the government of Nana Akufo-Addo has rather strengthened accountability institutions with increased budgetary allocations since 2017.

In his address, the former President also appeared to have issues with religious and traditional leaders, as well as journalists on their silence on issues and urged them to speak loudly against corruption.

“Nepotism doesn’t become right because a different government is in power and our religious and traditional leaders must have the courage to speak up against it,” former President Mahama said.

The former President also had issues with sections of the media, saying “the watchdog role of the media enshrined in the 1992 Constitution is gradually being thrown to the dogs.”

Having been silent on how his government fought corruption, the former President then said hypothetically that one of the things he will do to fight corruption if he is elected President again is that he will enforce Ghana’s asset declaration laws and further publish documents for public consumption.

There were varying reactions to the two addresses by the leading politicians on the theme of the conference.

While some people lauded both the Vice President and the former President for their addresses, others were of the view that former President Mahama fell short of giving details of what he did to fight corruption as President.

Making a comparative analysis of the speeches, some of the people present observed that Dr Bawumia outlined what the government has been doing to fight corruption in the past three years and that former President Mahama should have also told the congregation what his government did to fight corruption when he was Vice President and President respectively for eight years.