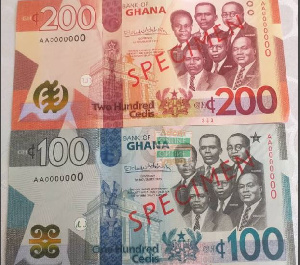 A look at the new currency

Some banks in Ghana are rejecting the recently-introduced GHS100 and GHS200 notes, opposition lawmaker Isaac Adongo has alleged.

Tackling the central bank on its recent response to former President John Mahama, who remarked that the regulator’s introduction of GHS100 and GHS200 was akin to an ambush, the opposition MP said the BoG’s claim that other countries were learning from its activities because they see them as emulatable was “laughable”.

According to Mr Adongo: “The worst part of it was the fact that even banks and financial institutions were and are still not prepared to accept the new denominations. This has resulted in customers, who attempt to deposit with the new denominations, being turned away by banks.

“In one embarrassing situation involving a politician who was turned away by a bank because their system had not been configured to accept the GHS200, the BoG called a crisis meeting involving CEOs of all banks to implore them to be compliant by accepting the GHS100 and GHS200 notes.

“What this means is that banks that have not yet reconfigured their systems to accept the new notes and detect fake ones will be doing so at their own risk and in the process, putting the entire currency system at risk.

“And this is the level of ambush and its implications on stakeholders and the economy that H.E. John Dramani Mahama is talking about”, the MP said.

Stop making a mockery of yourself. No serious country will learn from a discredited, lawless Bank of Ghana.

I have read a statement from BOG purporting to react to H.E. John Dramani Mahama’s well-reasoned position that the introduction of the GHS100 and GHS200 notes lacked transparency and amounted to an ambush of Ghanaians.

As Bank of Ghana would have noticed by now, various incidents and reactions by the general public to the introduction of the notes have vindicated that position of H.E. the former President.

As a result, the least one would have expected was for the Bank of Ghana to have silently absorbed the substance in that response, which is actually an amplification of the general concerns of Ghanaians to the needless exercise, and used it to guide its future endeavours.

Strangely, but not surprisingly though, the Bank of Ghana decided to ignore the substance of that position and took to a political and partisan recounting of incidents and vile parroting of its tainted and often doctored achievements in a manner that further amplifies the decay that the central bank has suffered since Dr Ernest Addison took over as Governor in early 2017.

In the first place, it is strange that the BoG, under the tainted Dr Addison, will attempt a response in the face of glaring evidence from the public and even commercial banks that support H.E. John Dramani Manama’s position that the introduction of the notes was an ambush on the Ghanaian people, who’s taxes fund its operations and pay the salary of Dr Addison.

The history and processes for the introduction of higher cedi denominations in Ghana are well-documented. Unless Dr Addison is unaware, the processes include extensive consultation with stakeholders, extensive public education and buy-in of the citizenry. It also involves getting banks and other financial institutions that are secondary distributors of the cedi to reconfigure their systems to ensure ease of implementation and system compliance. Beyond being a requirement in currency management, the reconfiguration of the systems of banks and other institutions is needed to guard against fake notes slipping into the system.

But as has now been proven, these were not complied with in the current ambush.

In one embarrassing situation involving a politician who was turned away by a bank because their system had not been configured to accept the GHS200, the BoG called a crisis meeting involving CEOs of all banks to implore them to be compliant by accepting the GHS100 and GHS200 notes.

What this means is that banks that have not yet reconfigured their systems to accept the new notes and detect fake ones will be doing so at their own risk and in the process, putting the entire currency system at risk.

And this is the level of ambush and its implications on stakeholders and the economy that H.E. John Dramani Mahama is talking about.

And that is why it is laughable that BoG, in the statement, claimed that other countries were learning from the central bank’s so-called good practices.

For the avoidance of doubt, no serious country, which is aware of this chaos and incompetence will learn from BoG.

In any case, which serious country will learn from BoG, a central bank that cooks monetary policy data, unless the Dr Addison-led central bank is able to conceal this from them as it had tried without success to conceal same from the Ghanaian people.

Which country will learn from a BoG which, in September 2019, mordaciously cooked its deteriorating capital adequacy ratio in the banking sector by adding 3% to the worsening rate to hide the failed banking sector mess?

Honestly, I do not see any serious country that will learn from a BoG which has failed to comply with its obligations to report to Parliament for its functions and special exercises under Section 4 of its Act as required by Section 53 (A) of its amended Act for almost 2 years in respect of 2018 and the financial sector collapse? No serious country learns from a lawless and non-compliant compliance officer like BoG.

How will someone learn from a BoG that has lost its independence and is now an appendage of the executive and used essentially for political witch-hunt in the name of financial sector reforms?

How can a Ken Ofori-Atta-controlled BoG, together with Nana Addo Danquah Akufo-Addo, waste GHS15.6 billion of taxpayers’ money to go after the banks of the NPP’s political opponents and in the process, destroy the entire financial sector, create massive job losses and shatter dreams and livelihoods, be an avenue for countries to learn? And when those countries come to learn, does Dr Addison tell them that he has, among other things, depleted $3 billion of Ghana’s net international reserves and exposed non-resident holders of government bonds to such heightened vulnerability and risks of exchange losses?

Ghana is now a good example of badly-managed net international reserves cover for non-resident holdings of domestic bonds. How can any country learn from a BoG that has only 50 cents to cover for every $6 of non-resident holdings of domestic bonds instead of the standard $1 for every $2. Are the ‘student countries’ of the Dr Addison-led BoG aware of these and if they are, do they come to learn those ineptitudes, too? Are they aware that Ghana has a stated and published policy to promote the development of a cashless society yet Dr Addison finds it prudent to burn taxpayers’ funds to print higher notes at a cost he is shy to state?

Only a country which does not know that you are holding the title for worst-performing currency in Africa and 4th worst in the world will learn from you.

I wish to advise Dr Addison and his team of serious credibility crisis, to swallow their pride, purge themselves of this huge credibility gap, listen and learn to improve their embarrassing abysmal performance.

Rather than debasing the central bank further by doubling as an arm of Ken Ofori-Atta to engage in politicking, Dr Addison should put his ears on the ground and listen to the concerns of the public on the introduction of the new notes. When he does, he will hear ordinary Ghanaians expressing their frustrations about the usage of the new notes in ways that justify the fact that those Ghanaians were ambushed in the introduction of the notes.

Central banking is not politicking; it is serious independent business and that is why the Constitution of Ghana created it as an independent body free of political control.

If upon all this, Dr Addison is satisfied with how low he has stooped the bank and made it a political appendage, he should not seek to deepen the situation by calling the bluff of the concerns of the public, when they are amplified by well-meaning Ghanaians.