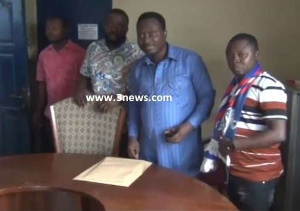 A member of the governing New Patriotic Party (NPP) in the Evalue Gwira Constituency in the Western Region, Eric Selby Ogbame, plans putting an injunction on the upcoming parliamentary primary.

He blames constituency and regional executives of the party for his inability to file his nomination forms to contest in the primary for Evalue Gwira.

According to Eric Selby Ogbame, when the party opened nominations, he went to the constituency office but was denied the forms.

Tried as he had, the constituency executives did not sell him a nomination form and with no explanation.

He then proceeded to the regional office in Takoradi, where he was successful in picking the forms.

Unfortunately, for two days he could not file his nomination forms despite assurances from the regional executives after picking his forms.

“I’m from Evalue Ajomoro Gwira. I decided to contest as an MP when nomination was opened. Since then it has been one frustration to the other. For ten working days, I was trekking the constituency office all to no avail. The constituency executives will not sell the forms to me and will also not tell me why. The regional office finally agreed to sell the forms to me. I finished filling the forms and since February 19, I’ve not been able to file.”

On Thursday, February 20, Eric Selby Ogbame had to sit at the regional office from 8am to 5pm with no executive showing up at the office to pick his forms when, according to him, they were aware of his presence.

A frustrated Selby Ogbame told 3news.com that the only option available to him now is to head straight to court.

“The nomination form is with me here. I am going to submit the forms anyway, here in the office. If they don’t call me to make sure that I contest in the coming primaries, what I think I will do is I will send them to court and I believe that the courts are there to make sure that justice is done.”

He added that “whoever is listening to me should bear in mind that Evalue Ajomoro Gwira consists of three strong dialects. I come from one of the biggest and I can assure you that my people are waiting for me to come and contest. I know what I’m going to do.”

Convinced that there is a grand scheme to deny him from contesting the parliamentary primaries, Mr. Selby Ogbamey left his forms and a cheque for GH¢5,000 on a table at the conference room of the party and left.

Another member from the Tarkwa Nsuaem constituency, Maame Yaa Frempomaa Ayensu, was also left stranded with her nomination forms at the regional office.

For several hours, she had to sit on the stairs leading to the regional office with her supporter as the office was locked.

Several calls to the Deputy Regional Secretary of the party, Rex Jonfiah, for an explanation went unanswered.