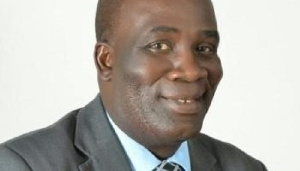 Mr Berko takes over from Mr Isaac Osei who resigned effective from January 1, 2020, after steering the affairs of the Refinery for two and a half years.

Sources at TOR confirmed his appointment to the Ghana News Agency in Tema.

Mr Berko had had an impressive career including, head of Debt Capital Markets and Structured Assets Solutions of Barclays Capital / Absa Capital, Johannesburg, South Africa, from June 2008 to June 2014.

He also worked as the vice-president of Credit-Suisse, Assets Finance, New York in addition to been vice-president and portfolio manager of Sun Trust Robinson-Humphrey.

The new TOR MD also worked as a manager at Ernst & Young, in charge of Asset Finance Solutions/Leasing Group in San Francisco and also held other positions in some companies.

Mr Berko holds an M.A. in economics from Tufts University, Medford Massachusetts, B.Sc(econ) in Economics & Accounting from the University of Hull, UK, Diploma in Computer Programming and Data Processing from the London-College, and a certificate in Econometrics & Regression Analysis from York University, Ontario, Canada.