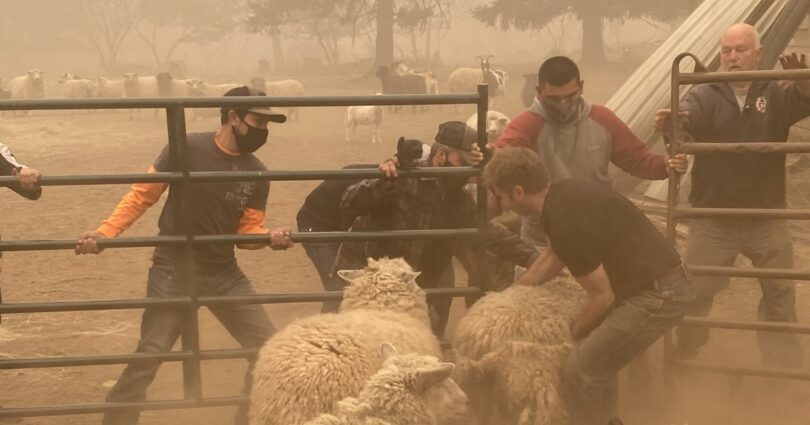 The plea for help appeared on Facebook just after noon: Dozens of animals were trapped on a farm outside the Oregon town of Colton. A wildfire was closing in.

Suzi Cloutier jumped in her pickup and headed south, towing a horse trailer.

As director of an animal sanctuary outside Portland, Cloutier has been on high alert amid some of the worst wildfires in Oregon history.

She sped past barricades near Colton, 30 miles south of Portland on the front lines of the 136,000-acre Riverside fire.

When she met a half-dozen other volunteers at the end of a remote gravel road, she saw a barnyard full of alpacas, sheep and chickens within 100 yards of billowing smoke. The woman who lived there had fled.

Her son was waiting for help to arrive. He and the volunteers, along with some neighbors, quickly arranged fencing in a funnel formation, then nudged 30 jittery sheep almost to the trailer doors.

Suddenly, the herd spooked and bolted past stunned gatekeepers and back to the barnyard.

“OK, what happened?” Cloutier asked her crew. “When the sheep are in, you have to close the gate behind them immediately.”

The volunteers would have to keep trying.

That was Friday. As of Monday, three dozen wildfires had burned more than 1 million acres in Oregon, killed 10 people, left more than two dozen missing, wiped out several towns, blanketed the state in thick smoke and forced more than 40,000 people to flee their homes.

The air quality in Portland this week was worse than that of any other major city on the planet.

Oregon Gov. Kate Brown told reporters Monday that “without question our state has been pushed to its limits” by the fires.

“It’s really hard for all of us to wrap our heads around the devastation that these fires have caused, and the pain and the suffering that so many Oregonians have endured over the past few days,” she said.

The good news was that progress had been made on many of the fires, and officials were hopeful that cooler temperatures and higher humidity expected into the weekend would help.

About 5,600 firefighters were battling the blazes — up from 3,000 two days earlier — and more were expected to arrive soon from North Dakota and Minnesota.

Amid the devastation, hundreds of volunteers have been scrambling to rescue pets and livestock, sometimes literally driving through flames to reach the stranded creatures.

Confusion reigned as rural residents brought hundreds of animals to the Clackamas County fairgrounds in the city of Canby, only to relocate most of them after hearing — wrongly, it turned out — that an evacuation was being ordered.

Fires spread so quickly last week that many people who evacuated lacked time to round up livestock, or trucks and trailers to transport their animals.

Frantic owners posted plaintive messages on social media with photographs and locations, in hopes that strangers would try to retrieve them.

“My horse is still standing alone at my burned down house,” said a post last week on Cowgirl 911, a Facebook group created to enable rescues. “He has one white foot. He is a bay.”

The owner included a video clip of the horse and an address in the town of Vida, 30 miles east of Eugene, that was in the path of the Holiday Farm fire, 160,000 acres and growing.

Stephanie Olson, 32, a backcountry pack-horse guide who lives outside the central Oregon city of Bend, finally reached the owner and arranged Saturday to retrieve the big bay named Toby, as well as some other horses nearby.

The two-hour drive west to Vida was a tour of destruction. After crossing 4,800-foot Santiam pass, Olson wound through the McKenzie River valley and past the charred remains of the town of Blue River.

It was midday when she reached a roadblock and explained her mission to a state trooper.

Vida’s outskirts were on fire when she arrived, horse pastures flanked by burning trees. Olson tried for two hours to wrangle two mares, one of which had never worn a halter.

Five firefighters sprayed water on flames at the base of the trees, cutting some down as she pursued the horses and darkness fell.

Olson caught one mare and loaded it into her trailer, then the other.

Finally, with the help of another rescuer, she found Toby. Together, they loaded him and two more mares into her trailer.

Olson made it home that evening. She is caring for five horses she evacuated and said she wouldn’t hesitate to make more rescue attempts.

As for the rescue effort near Colton, Cloutier and other volunteers managed to save a young Jersey bull after a neighbor lured the ornery animal to safety, holding out a bucket of grain and dancing backward, just out of range of his sharp horns.

Ten feet from the doors of a trailer, he veered right and jumped a rope strung between the truck and a tree. But the volunteers eventually enticed him into the trailer and bolted the doors.

All that remained were the sheep. Four men who had shown up later in the day vowed to lasso them. Cloutier rolled her eyes.

She was right. The owner of Zeb’s Wish Equine Sanctuary, in Sandy, Ore., knows more than horses. She led the volunteers as they coaxed 10 sheep into a trailer.

Twenty more, panicked by the smoke and the chase, could not be caught.

“It was too late,” Cloutier said. “There’s a point where it’s futile. You’re just putting a lot of lives at risk. It’s sad.”