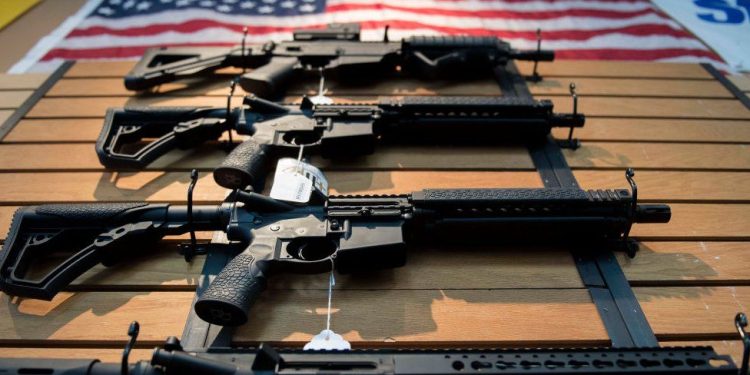 A US woman has fatally shot a man who opened fire on a crowd of people with a semi-automatic rifle in Charleston, West Virginia.

Dennis Butler, a 37-year-old with an extensive criminal history, was killed after he targeted a group of around 40 people attending a birthday party.

It comes amid a national debate over guns after a school shooting in Texas.

Butler had driven by the area earlier on Wednesday evening when he was warned to slow down because children were playing.

He returned armed with an AR-15-type rifle and opened fire from his vehicle on the birthday-graduation party outside the apartment complex in the city.

Mr Hazelett told a news conference that the woman who fired back did not have any law enforcement background. She has not been identified.

“She’s just a member of the community who was carrying her weapon lawfully,” he said. “And instead of running from the threat she engaged with the threat and saved several lives.”

The woman remained at the scene after the shooting, and is co-operating with investigators.

Charges will not be filed against her, police added.

Butler was found dead at the scene from multiple gunshot wounds, police said.

Mr Hazelett said it is not yet clear how Butler obtained the weapon – which he was not legally allowed to carry as a convicted felon.

The shooting comes after a teenage gunman killed 21 people at a Texas primary school with an AR-15 semi-automatic rifle that had been purchased legally.

The attack, America’s worst school shooting in a decade, reignited the debate over private gun ownership, which is enshrined in the US Constitution.