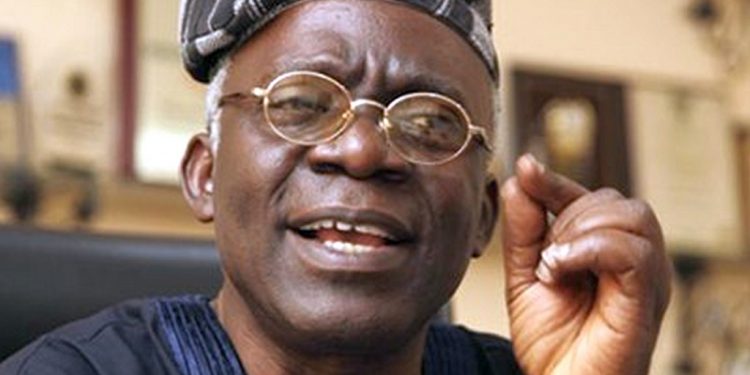 Femi Falana, the lawyer for Venezuelan businessman Alex Saab in the human rights case that was before the ECOWAS Court has formally written to Cape Verde to immediately enforce the judgement of the court.

The court on Monday ruled in favour of Mr. Saab, declaring his arrest and detention by officials of Cape Verde as illegal and arbitrary.

The court, presided over by Hon Justice Edward Amoako Asante consequently ruled that Alex Saab be released with immediate effect and that Cape Verde stops any procedures and processes towards his extradition to the United States of America.

The court also awarded a $200,000 fine against Cape Verde to be paid as compensation to Alex Saab for the wrongful arrest and detention.

Femi Falana in his letter addressed to Jorge Carlos de Almeida Fonseca, President of Cape Verde; and Jose Ulisses de Pina Correia e Silva, the Prime Minister said Cape Verde has a moral and legal responsibility to “respect the sanctity, integrity, authority and independence of the Community Court of Justice.”

He said he expects that Cape Verde will immediately comply with the directives of the court including the payment of the compensation to Alex Saab.

“In view of the fact that the judgement of the Court is binding and immediately enforceable we are compelled to respectfully request Your Excellencies to ensure that the government of the Republic of Cabo Verde complies with the judgement as well as provides safe passage for Mr. Saab to enable him to assume his diplomatic duties as an Alternate Permanent Representative of the Bolivarian Republic of Venezuela to the African Union,” Femi Falana said in the letter.

Alex Saab, an ally of the Nicolás Maduro regime in Venezuela was arrested in Cape Verde on June 12, 2020 on the orders of the US.

The US subsequently made a request for him to be extradited to face charges of corruption and money laundering.

Although Cape Verde accepted the request, it was stopped from carrying it out immediately due to court proceedings including the one at the ECOWAS Court.

At the previous court sitting, Femi Falana argued that his client enjoyed diplomatic immunity and could therefore not be subjected to imprisonment as Cape Verde had done.

He further indicated that the said INTERPOL Red Alert that empowered Cape Verde to effect the arrest was void as it was issued after the arrest.

Henrique Borges, representing Cape Verde also argued in February that there was no evidence to prove Alex Saab’s diplomatic status hence the actions taken by the government were justified.

But the court ruled that although Saab did not possess valid requirements qualifying him as a diplomat accredited in Cape Verde or other state or of high political office at the time of his arrest, the evidence before it showed that that Cape Verde effected the arrest of Mr Saab on 12 June 2020 without informing him of the reasons for his arrest or presenting to him an arrest warrant or a red alert issued by Interpol for his extradition in line with the United Nations Convention against Transnational Organized Crime to which both the US and Cape Verde are signatories, and contrary to Cape Verdean national laws.

“Accordingly, the Court held that the Applicant’s arrest and detention was arbitrary and illegal in violation of the Respondent’s national laws and violated Article 6 the African Charter on Human and Peoples’ Rights and Article 9 (1) of the International Covenant on Civil and Political Rights.”

Cape Verde is yet to make any formal statements on the developments.