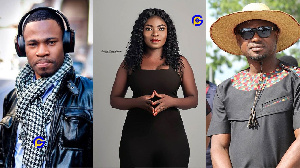 One of the major things Ghanaians deal with at the beginning of every year is prophecies. Many prophets tend to predict the direction of the country through prophecies, and this year has not been different.

Apostle Francis Amoako Attah, Founder and General Overseer of the Lord’s Parliament Chapel International, has said the massive resignation at Adom FM was as a result of a dragon spirit within the Multimedia conglomerate.

According to him, the first person to suffer this fate was Okay FM Presenter, Gilbert Abeiku Aggrey Santana, popularly known as Abeiku Santana.

“Abeiku Santana would have been much popular than what he is today but the dragon picked him and threw him away,” Rev Amoako Attah stated.

He said Kofi Adomah Nwanwanii of Kofi TV was the second person the dragon picked.

“His own came after he was enstooled a chief in his hometown,” said Rev. Amoako Atta.

The man of God further stated that Okay FM’s Afia Pokuaa, known as Vim Lady, would have gone to the highest point in her career but the dragon at a point had to pick her out of the Kokomlemle media establishment and put her elsewhere.

Rev. Amoako Attah added that the only person that this spiritual dragon has never succeeded in ‘throwing’ his out of Adom FM is Captian Smart.

This is because the spirit of his mother is very powerful such that anytime the dragon strikes at him, it is unable to succeed.

“Something must be done and that demon has to be cast out,” the Reverend Minister said on Adom FM’s morning show, Dwaso Nsem.

Rev. Amoako Attah claims some awards which were to come in favour of Adom FM presenters were sold in the spiritual realm.

He also said that the dragon spirit always dims the shine of Adom FM presenters and it must be dealt with spiritually.