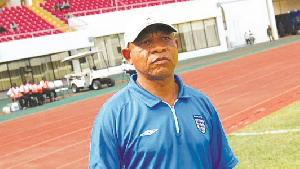 After clinching the championship prize in 1993, the Kumasi-based side suffered a series of disappointments as they went 10 straight years without laying hands on the title.

Razak turned out to be the ultimate hero as he led Kotoko to end their frustrating run. It was their eighteenth time of ruling the elite division.

“The management of Kotoko at the time asked me to sign a new contract but I gave it [contract] to my manager Jones Abu Alhassan to study it and I told them [Kotoko] to wait for a while before [I make] decision to put pen to paper,” Razak told Pulse Ghana.

“After the league success, [Kotoko life patron] Otumfuo [Osei-Tutu II] invited us and when we met him in the company of some of the sub-chief, they all praised us for the good job done.

“However, when the management were asked to render an account, they stated that they bought some of the games we won and that contributed to the success we chalked.

“Looking at the calibre of players I had, I couldn’t let them attribute our league triumph to match-fixing, so I had issues with the management and I had to leave.”

Since the 2003 feat Kotoko have won the Premier League on five more occasions and currently stand as the most successful club in the history of the top-flight, with 23 titles.

But coaching was not the 64-year-old’s only association with the Porcupine Warriors.

A former footballer, Razak played for Kotoko in the 1970s and 1980s, helping the club to three league titles, one FA Cup gold and one Swag Cup success.

On the international scene, the former attacker played a key role as Ghana won the 1978 Africa Cup of Nations on home soil.

That year, he earned the African Footballer of the Year award.