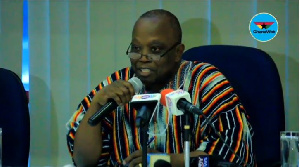 The Ghana Audit Service say a lot of public servants in the country are illegally occupying their positions because they have failed to fulfil the constitutional obligation of declaring their assets and liabilities.

Quoting Article 286 of the 1992 Constitution, Assistant Public Relations Officer of the Audit Service said the category of persons to declare their assets and liabilities are required by law to do so before assuming that police.

However, he revealed that a large number of public servants who have not declared their assets and liabilities are occupying public office, something he said contravene the laws of Ghana.

“You need to do it [declare assets and liabilities] before you occupy that office and if you’ve not done it and you’re occupying that office, per the constitution, you’re occupying it illegally,” Mr Conduah told Alfred Ocansey on TV3 News360 on Thursday.

“…People [who] come into public office, particularly those in the political class, they have been complying a lot,” he stated.

The Auditor-General in a statement this week announced new measures being taken by the Audit Service to tighten the loose ends of the law and auditing for the 2019 financial year.

These measures have been communicated to all public service holders, especially public servants.

Explaining the issues further on TV3, Mr Conduah said for instance, a director of finance, a budget officer in the public service are all required by the law to declare their assets and liabilities.

“Also, it says that if your salary is at the minimum seal of 4,592 cedis a month excluding your allowances, you are also to declare your assets and liabilities,” added.

“Let me just appeal to my colleague public servants that this is not meant to embarrass anybody; it is a duty that you are supposed to do… so they should cooperate with the Audit Service staff across the country who will come to do the 2019 financial audit to help them go through this,” he appealed.

Mr Condua underscored the need for all public office holders required to declare their assets and liabilities, saying “assuming someone comes to public office and has secured a loan, how will you know the person is indebted? If this person takes public funds to offset those loans how will you even see?”

Meanwhile, he has revealed that the Audit Service is to begin the verification of all assets and liabilities declared by all public office holders in the country.

Despite the declaration by some public office holders, the Audit Service has over the years not been able to verify the authenticity of the information provided in the declaration forms, something anti-graft campaigners have criticised.

“The next level to go is to do verification of these declarations,” assistant Public Relations officer of the Ghana Audit Service Bernard Asare Conduah.

He added: “That is where we are going now. So at the moment, we are even loading all the information people have provided into an electronic data system so that from there, our officers can begin to move over and verify these assets”.

“The challenge we have at the moment is our poor addressing system…There are houses in Dansoman here in Accra which do not even have house numbers, notwithstanding the Service is putting measures in place to ensure that staff can go deeper,” he assured.