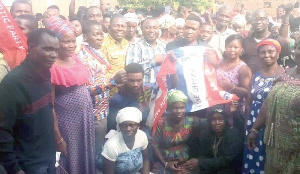 Some of the defectors

More than 850 members of the opposition National Democratic Congress (NDC) in seven communities at Tozekope Electoral Area in the Sene East Constituency of the Bono East Region have defected to the ruling New Patriotic Party (NPP).

Nana Narty Peter, a leading member of the party who spoke for the defectors, made their decision known at a mini rally at Tozekope during the Yuletide.

In a speech, Mr. Nartey said residents of the area had been voting for the NDC since the inception of Ghana’s democratic dispensation but their communities had never benefited from the party in terms of jobs for the youth, good roads, potable water and economic improvement, for which reason they have decided to join the NPP.

The NPP parliamentary candidate for the constituency, Nicholas Betigan, appealed to residents to give him the opportunity to lead them and transform the area for better economic development since the NDC had failed them woefully.

According to him, the Sene East Constituency needs somebody like him who understands and knows their issues so that he can make them known in Parliament for government to address them, adding that the NDC had deceived them for far too long. He cautioned them not to allow the NDC to deceive them to rescind their decision of joining the NPP.

On behalf of the NPP, the Constituency Chairman of the party, Ibrahim, Udonyi, supported by the DCE for the area, Mbanyer Kwadwo Abraham, among other executives, received the defectors and thanked them for their bold decision, saying they would never live to regret it.