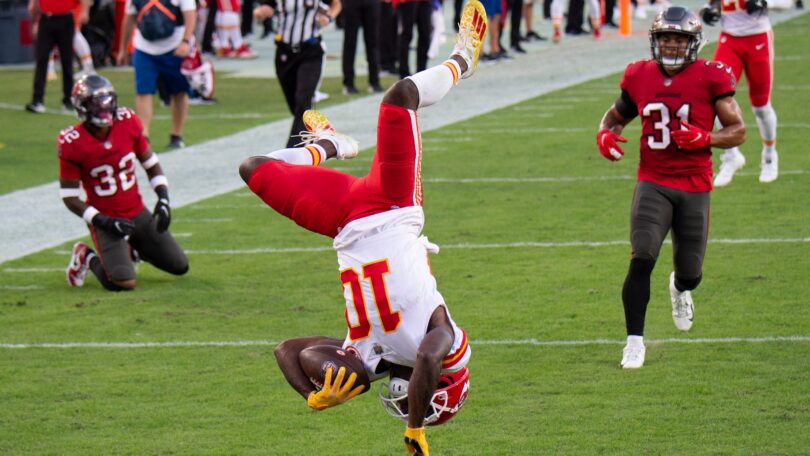 1. It’s time to start talking about the Titans’ Derrick Henry as a serious MVP candidate … even if a running back has only captured the award once – Adrian Peterson in 2012 – since the start of the 2007 season. Henry churned out 178 yards and three TDs on the ground Sunday (all but 38 yards before halftime) as Tennessee routed the Colts 45-26 to reclaim first place in the AFC South.

1a. Henry has exceeded 100 yards rushing seven times this season and leads the league with 1,257 total. That puts him on pace for 1,828 – a huge number in this NFL passing era.

1b. And don’t forget, Henry is historically a very strong finisher. He averages 88.9 rushing yards over his career in December, well ahead of second-best month – which is November (70.4 rush ypg before Sunday). Including playoffs, “King Henry” piled up 1,342 rushing yards over his final nine games of the 2019 season.

2. The playoff picture is slowly crystallizing, and the two teams longest absent from postseason – the Browns (2002) and Buccaneers (2007) – are both well positioned to end their droughts.

3. Game of the weekend? Naturally, Panthers at Vikings … as we all predicted. Minnesota WR Chad Beebe went from goat to glory in the final minutes, muffing a punt which led to a Carolina field goal before catching the game-winning TD in a 28-27 triumph.

3a. Yet the game’s never that close if Panthers rookie LB Jeremy Chinn doesn’t score a pair of TDs off fumble recoveries … on consecutive plays. Chinn is the first player in the Super Bowl era with two pick-up-sixes in one game.

.@Panthers rookie safety @JeremyChinn21 is the 3rd player in @NFL history with multiple fumble-return touchdowns in a single game.

4. Of course anyone with a shred of sentimentality would have loved to see Carolina QB Teddy Bridgewater earn the win in his first start against the Vikings, who picked him in Round 1 of the 2014 draft but eventually let the very popular passer go after a knee injury nearly ended his career in 2016.

6. The NFL’s Thanksgiving was pretty much a microcosm of 2020 given the postponement of Thursday night’s main course between AFC North archrivals Baltimore and Pittsburgh due to COVID-19. With the Texans, Lions, Washington and Cowboys left on the menu – and their combined 13-27 record prior to kickoff – this year “featured” the worst combined winning percentage (.325) among Turkey Day participants, per Elias.

7. And a gloomy Holiday season was further darkened for former Detroit coach Matt Patricia and GM Bob Quinn, fired amid another lost season that saw the Lions not only losing but failing to be competitive, dropping four of their last five by at least 10 points.

7b. Head coaches sprouting from the Belichick tree had a combined regular-season record of 208-296-1 (.413) entering Sunday.

8. Also sent to the chopping block Sunday: Jacksonville GM David Caldwell, whose successor in 2021 will likely get to bring in either Clemson QB Trevor Lawrence or Ohio State QB Justin Fields.

9. The Browns have never been 8-3 since they returned to the league in 1999. Currently owners of the AFC’s top wild card, they’re also guaranteed their first non-losing season since 2007.

10. If you were impressed with Houston WR Will Fuller V on Thursday (6 grabs, 171 yards, 2 TDs), well, you should be. And the soon-to-be free agent speedster is only seeing his price tag balloon as his career season (53 grabs, 879 yards, 8 TDs) keeps gaining steam.

Kansas City Chiefs wide receiver Tyreek Hill (10) does a back flip into the end zone to score a touchdown against the Tampa Bay Buccaneers during an NFL football game, Sunday, Nov. 29, 2020, in Tampa, Fla. (Photo: Doug Murray, AP)

14. Mahomes hooked up with WR Tyreek Hill for 203 yards in the first quarter at Tampa … though kind of disappointing Hill didn’t wind up with a 1,000-yard game.

15. Tampa Bay has dropped three of four but – after getting Week 13 off – the Bucs don’t face a winning team (Vikings, Lions, Falcons twice) the rest of the way.

16. You know it’s Week 12 when teams are turning to QBs like Mike Glennon (Jaguars), Brandon Allen (Bengals) and Kendall Hinton (Broncos) … more on him later.

17. Let’s give overdue credit to Washington’s Ron Rivera, whose decision to bench second-year QB Dwayne Haskins earlier this season came with the first-year head coach’s dubious assertion that the Football Team could still compete for the NFC East crown. Twelve weeks into the season, the WFT is tied for the best record in the division, though technically behind the Giants after getting swept by New York.

17a. But the Giants could be in trouble if QB Daniel Jones’ hamstring issue is as crippling as it seemed Sunday.

COVID-19. Boy is the pandemic beginning to exert its will on the NFL. Stars like the Ravens’ Lamar Jackson, Browns’ Myles Garrett, Colts’ DeForest Buckner, Vikings’ Adam Thielen and Cardinals’ Larry Fitzgerald are among those now missing games due to the virus.

COVID-19a. Baltimore-Pittsburgh is the first game postponed due to COVID since Week 5, and the league will probably be lucky if it actually gets played Tuesday night.

COVID-19b. The 49ers will not be able to play or practice in their Santa Clara, California, home with contact sports prohibited for the immediate future in the county. The Niners could call Arizona home for the rest of the season.

COVID-19c. But the craziest development of the week occurred in Denver, where potential exposure forced the Broncos to shelve all of their quarterbacks and play practice squad receiver Hinton – he was never even the primary signal caller while at Wake Forest – under center. Regular starter Drew Lock apologized Sunday for a lapse with masking vigilance.

COVID-19d. Broncos fans weren’t happy watching their team get whacked by the Saints, especially after Denver lobbied to move the game to Monday, per NBC, when Lock and others could have potentially played. But hard to blame the league for being unwilling to make concessions when exposures are contained given how hard the NFL has been preaching COVID-19 discipline for months.

COVID-19e. And hopefully the undefeated Steelers, many of them quite upset Thursday’s game was moved, won’t lash out the next time the virus infringes on their schedule … especially now that their own COVID-19 list expands with important players like RB James Conner and DL Stephon Tuitt sidelined.

20. Poor Hinton was quite Tebow-esque in the 31-3 blowout, completing three of his nine passes – and two of those were to New Orleans defensive backs.

21. Saints QB Taysom Hill scored twice more on the ground, giving him eight career rushing TDs. He has yet to thrown an NFL TD pass.

22. New Orleans is 7-0 since last season without starting QB Drew Brees and maintains control of the NFC’s No. 1 playoff seed.

23. The Bears and Packers have now met 201 times, most in league history. Green Bay notched its 100th win of the series Sunday night. (Chicago has 95 victories, the other six games ending in ties.)

24. Chargers DE Joey Bosa had three sacks Sunday, matching the career high of younger brother Nick (who’s out for the season in San Francisco). Their father, John Bosa, never had more than a two-sack day for Miami.

25. But Bosa’s big day didn’t help the Bolts (3-8), who lost by more than one score, 27-17 at Buffalo, for the first time this season. Clock management was at least part of the issue.

26. Former Heisman Trophy winners and offensive rookies of the year Kyler Murray and Cam Newton … combined for three turnovers and zero TDs in their first meeting. Probably gonna be a minute before Murray joins Newton as an NFL MVP given how the Cardinals are suddenly spiraling after Sunday’s loss at New England.

27. The Las Vegas Raiders entered Sunday with a 6-4 record and a relatively rosy playoff outlook. Five turnovers – four by QB Derek Carr – 11 penalties (for 141 yards) and 43-6 blowout loss to Atlanta later … well, you’re reminded of the 2019 Oakland Raiders, who started 6-5 … then lost to the Jets in New York 34-3. That Silver and Black edition finished 7-9.

28. Don’t count the 49ers out just yet. RB Raheem Mostert (43 rush yards, TD), WR Deebo Samuel (11 catches, 133 yards) and CB Richard Sherman (INT, team-high 7 tackles) were all back in uniform as San Francisco ambushed the Rams. The Niners are only one game back in the win column for the NFC’s final wild-card spot.

29. With the Saints defeating the Broncos on Sunday, New Orleans coach Sean Payton now has a win over every NFL team … except the Saints.

With the win over the Broncos, Sean Payton becomes the 13th head coach in @NFL history to defeat 31+ teams! #Saintspic.twitter.com/qRSfwz4bjT

30. Without QB Joe Burrow and RB Joe Mixon, the Bengals may quickly become the NFL’s least competitive team … though the Jets won’t get to prove that.

31. Cincinnati became the first non-NFC East team to lose to the Giants this year.

If you love talking football, we have the perfect spot for you. Join our Facebook Group, The Ruling Off the Field, to engage in friendly debate and conversation with fellow football fans and our NFL insiders. Do the right thing, sign up now!