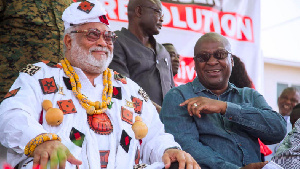 Rawlings and Mahama all smiles

Former president Jerry John Rawlings and NDC flagbearer for the 2020 presidential elections have finally made peace, as the two gentlemen are seen publicly in a chit-chat during the 31st December Revolution commemoration in Winneba on Tuesday.

It has been alleged that there is a bad blood between the two statesmen.

In a number of public encounters and appearances, the NDC founder, especially has been seen to be very hostile to the John Mahama.

But on Tuesday, December 31, 2019, the two party members were seen chatting excitedly during the 38th anniversary commemoration of the 31st December Revolution.

The December 31 coup led by the then Flt Lt J.J. Rawlings overthrew the Limann administration over allegations of corruption.

Although considered one of the bloodiest periods in the country’s history, its advocates say it ushered in a period of economic and political transformation that culminated in the re-establishment of lasting constitutional rule in 1992.