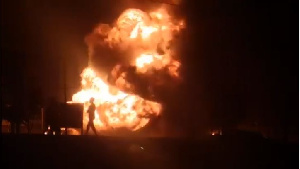 Three fuel tankers parked close to a Bulk Oil Storage and Transporation Company (BOST) depot at Buipe in the Central Gonja District of the Savannah Region have been totally razed by fire.

The inferno struck the tankers and their contents, Friday evening around 7 pm but firefighters were helpless to extinguish the fire due to a lack of fire tenders.

There were no casualties but an assistant of one of the drivers of the fuel tankers suffered severe burns and has been sent to the hospital.

The fire took at least two hours to bring under control because of a lack of fire tenders.

Adom News Correspondent, Rebecca Natomah, reports that residents close to the incident assisted in quelling the fire with buckets of water.

Rebecca said fire extinguishers at the BOST depot also came in handy to fight the fire.

Friday’s incident also forced occupants of residences sited close to the depot to flee the area.

Savannah Region fire commander, Kwasi Baffour-Awuah, told Rebecca Natomah that the Central Gonja fire tender, which would have been used to fight the fire, has been down for almost a year.

Baffour-Awuah adds that out of the seven districts in the Savannah Region, only three have fire tenders. Damongo, Salaga and Sawla are the three districts with functioning fire tenders.

The fire commander has since appealed to the government for financial support to work on the tenders in the four districts especially during the current Harmattan season.

He also revealed that the situation is so bad that in Bole, for instance, fire personals use motorbikes with fire extinguishers to fight fires.