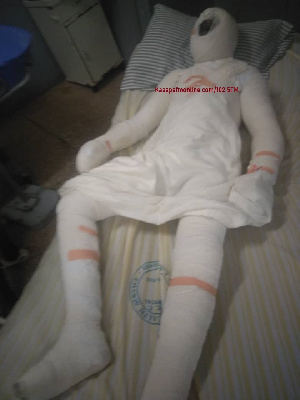 The incident occurred Friday when a fisherman set fire on a coal pot near a premix fuel.

Three persons have died with five others sustaining serious injuries in a premix fuel explosion at Elmina in the Komenda Edina Eguafo Abrem in the Central Region.

The incident occurred Friday when a fisherman named Kwaw Tawiah reportedly set fire on a coal pot near the premix fuel which was being kept in a room.

Residents tell Kasapa FM’s Yaw Boagyan that not long after, the fuel which was being discharged in the process caught fire and consumed the persons who were in the room and destroyed other items.

The three who lost their lives have been sent to Cape Coast Mortuary while the injured are receiving treatment at the University of Cape Coast Hospital.

It would be recalled that in March 2019, there was a similar incident in the same Central Region where four persons died in a premix fuel explosion at Kormantine in the Mfantsiman Municipality.

The four who were residents in a house, were asleep when the fire broke out Friday.

According to the facts of the accident, the burnt house had been stocked with barrels of premix fuel and the fishermen were drawing fuel from one of the rooms which houses the fuel for their morning fishing duties.

According to eyewitnesses, one of the tenants in the house had set fire close to where the premix fuel was being brought out of the room, and in the process caught fire.