2020 Prophecies: There is a plot to kill EC Chair - Republik City News 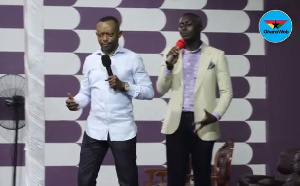 The year 2020 is a very significant one in Ghana as it defines which individual, as well as political party, will take the reins of governance.

A key player in all this is the Chairperson of the Electoral Commission, Jean Mensa.

But trouble seems to be looming, according to the founder and leader of Glorious Word Power Ministry International.

Rev. Isaac Owusu Bempah as part of prophecies for this year revealed that plans have been put in place by unscrupulous persons to assassinate Madam Jean Mensa.

“…some persons want to strike down the EC Chair and her deputies. The attacks are both spiritual and physical. She needs to entreat men of God to pray for her because they are summoning her spiritually to kill her…”

He cautioned her not to make light of the revelation as this is not the first time, he had seen it.

“… last time her spirit was summoned to be killed but I intervened and saved her… She is being sought after spiritually and physically. Security for Mrs Jean Mensa has to be beefed us both physically and spiritually. Leaders of her church must also pray fervently for her protection..” Owusu Bempah noted.

The man of God was, however, confident their plans would not come to fruition because God had appointed a Cherubim with a sword to protect the EC Chair. He added that the angel was sent forth after the prophecy was revealed to him.